AoneFlow incorporates the strengths of both Trunk Based and ** Git Flow ** while introducing new automation and branch management tools for timely release of quality software products.

*This blog is a translation from the English version. You can check the original from here. We use some machine translation. If you find any mistakes in the translation, we would appreciate it if you could point it out. * 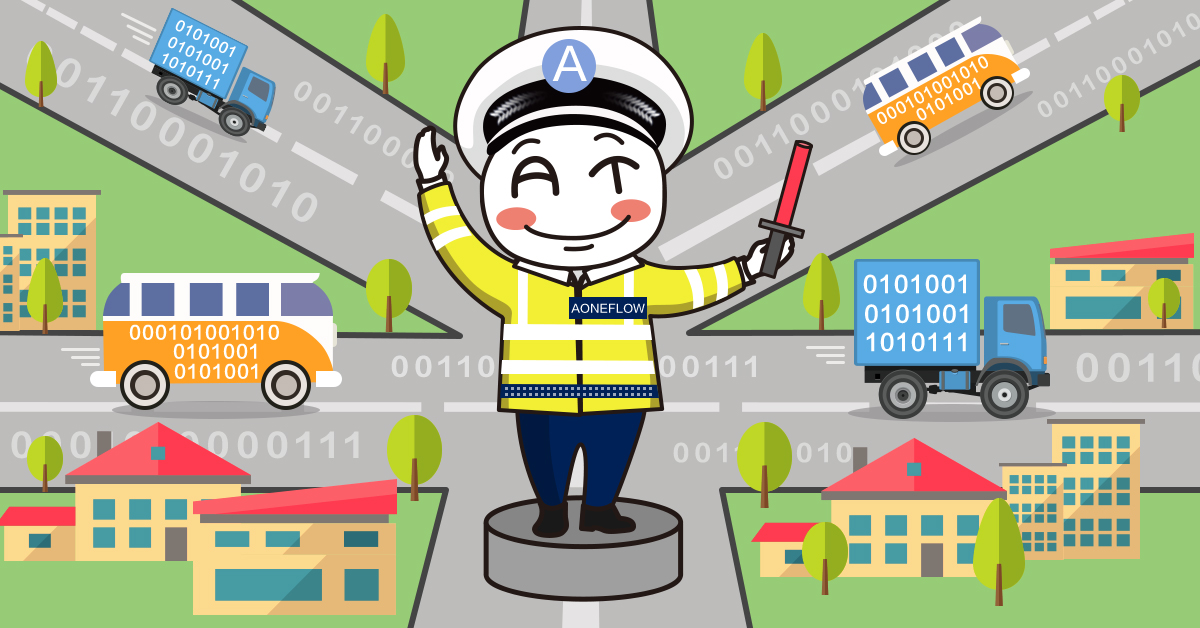 AoneFlow is partly based on the structure and functionality of TrunkBased and GitFlow, the most commonly used branch management techniques for software developers. Both systems provide useful features, and based on existing systems, AoneFlow has the advantage of being familiar to software developers.

The advantage of TrunkBased is continuous integration. The structure consists of a single trunk branch and many release branches. Each release branch is created from the trunk with a specific version commit point for online deployment and hotfixes. There is no explicit feature branch. GitFlow allows each developer to have a local branch, whereas TrunkBased does not rule out short-lived functional branches. However, this feature is not widely used by TrunkBased developers.

TrunkBased has recently become less popular with GitFlow because of some drawbacks. First, if you have too many teams coding in the same trunk, you may get an error during release. FeatureToggle was implemented as a solution, but it requires too much integration and good test coverage, which overwhelms the capabilities of the development team. As a result, TrunkBased is mostly used in SaaS projects that do not need to manage multiple past versions simultaneously. These projects are small services that have undergone a major transformation of microservices.

There are two evolutions in Trunk Based mode. OneFlow and Multi-Trunk. OneFlow uses many of the same features as TrunkBased, but with a more rigorous definition of the operational flow and features like Hotfix branches. Multi-Trunk uses fixed release branches in addition to dual trunks and fixed development branches.

GitFlow has a different structure than TrunkBased. It consists of a trunk branch and numerous feature, release, and hotfix branches. GitFlow was previously most used by process-oriented companies due to its clear operational definition at each stage. However, GitFlow is not user friendly and contains a lot of cumbersome merge rules. Merge conflicts and integration testing issues are often criticized.

A lesser-known branch management method is GithubFlow, which is basically TrunkBased with the addition of a merge operation for private warehouses and pull request code. This process is similar to adding individual branches to the same warehouse, making it ideal for distributed teams. GithubFlow also has its own evolution: GitlabFlow takes advantage of deployments in multiple environments and associates warehouses and branches within those environments.

However, AoneFlow starts with its predecessor by establishing three core rules for a branch management workflow.

1.Before you start, create a functional branch from the trunk.

The feature branch of AoneFlow has been adopted from GitFlow. When a new job is started (creating a new function, resolving errors, etc.), the feature branch with the prefix “feature/” is created from the trunk representing the latest release version. Code changes will be committed in this branch. Each job corresponds to one feature branch, and you cannot commit changes directly to the trunk, as shown in the following figure.

This rule is AoneFlow’s most innovative achievement.

In contrast, AoneFlow pulls a new branch from the trunk and merges all the feature branches waiting for release or integration to create a release branch (usually denoted by the “release/” prefix). ).

While simple, it has many uses. Release branches are flexible and can be associated with a particular environment using assembly line tools (for example, a release / test branch is paired with a deployment test environment). This tool connects code quality scanning and automated test levels to a diverse set of environments. Finally, the resulting deployment package is released directly to the appropriate environment.

At a higher level, release branches can be associated with multiple environments for tasks such as chaining phased releases with official releases. This adds an additional human inspection step to ensure reliability. You can also create a continuous integration assembly line by associating functional branches according to an iterative plan, iterative evolution to create fixed release branches, and a set of environments tied to release branch assembly lines. You can also implement the effects of TrunkBased by associating all functional branches and devoting all your commits to integration testing.

In addition, the configuration of features in the release branch is dynamic and can be easily adjusted.

For example, a small company that employs “Agile operations” may have to abandon a feature release due to changes in market strategy or have a last-minute removal of a feature due to an error. This usually involves manually “checking the code” or removing the associated commitments that have been merged into the development or trunk branches one by one.

In contrast, AoneFlow allows you to build a release branch in less than a minute. This is done by deleting the original release branch, pulling a new release branch of the same name from the trunk branch, and merging the feature branches that you need to keep. This series of operations can be automated, clean and free from contamination.

Finally, the loosely coupled release branches allow you to integrate and test multiple integrated environments based on a combination of different features. It is also useful for managing when features are deployed in different environments. Despite being loosely coupled, there is a correlation between release branches. Release steps for test, integration, pre-release, staged, and online formal environments are typically performed sequentially. This means that the user can set requirements, and only those characteristics that have passed validation in the previous environment can be transferred to the next environment for deployment. As a result, a funnel-shaped feature release stream is created.

In addition, Alibaba has created a unified platform for automating and migrating the combination of features between release branches as described in the next section.

With AoneFlow, the latest version of the trunk branch is always the same as the online version (similar to GitFlow). If the user wants to trace back past versions, they just need to find the corresponding version label on the trunk branch.

Along with rules 1-3, AoneFlow adds some practical operations. For example, when a hotfix comes online, the normal processing method is to create a new release branch (corresponding to the hotfix branch) corresponding to the online environment. It then creates a temporary assembly line for the release branch so that pre-release inspections and smoke tests can be run automatically.

AoneFlow allows you to find the location of the version label on your trunk branch and create a hotfix branch directly there. This allows the user to effectively perform some important operations.

Alibaba consistently seeks to optimize its branch management process. Most recently, we have documented Java development best practices and compiled them into the Alibaba Java Development Manual. This allowed us to standardize Java development across the team and improve the quality and efficiency of our work.

As a solution, I added a rule to the coding guidelines that code for online releases should not use dependent packages that contain “SNAPSHOT versions” or unofficial releases. These guidelines give our team more control over the quality of the products they produce.

We’ve also added a number of tools to make it easier for developers. For example, with the AoneFlow platform, developers no longer have to manually use Git commands to create, merge, or modify branches. Manual work is error prone and time consuming. The AoneFlow platform denies these issues by controlling the entire R&D process and adding numerous built-in service components to enhance R&D efficiency. This platform offers several important benefits.

There are many code branches in the life cycle of AoneFlow. Creating and updating these branches involves complex actions. By automating this process, quality and efficiency are not lost due to human error.

AoneFlow uses automated CI/CD assembly lines to create and update branches of code. This assembly line links all the independent branches of your code in the life cycle and directs them more efficiently towards their intended functionality (eg commit code for integration testing). .. This is especially true for release branches, which can be tied to a particular deployment environment. You can check the new code merged into your branch and deploy it more efficiently.

In an ideal branch management scenario, each branch should be paired with an assembly line that matches its role. The release branch of AoneFlow is relatively fixed and more easily integrated than GitFlow, so almost all available assembly line tools are compatible with AoneFlow.

Maintaining the association between the feature branch and the research branch is a unique issue that AoneFlow addresses.

When making changes to an existing feature set, it’s important to remember which feature branch the release branch came from. For example, if a feature is removed from a particular release branch, multiple feature branches will be merged and replaced with the original release branch, including those that don’t contain the feature. It is difficult and time consuming to manually record which branches were merged.

AoneFlow includes some automation features that improve this process. When a particular feature combination is validated in a low-level release environment (such as integration testing), that content is moved directly to the corresponding release branch in the high-level environment (such as pre-release). This ensures that the online version has passed pre-release validation, the pre-release version has passed integrated validation, and other important processes. This will connect all release branches in a series of flows. This process can be completed with a normal Git command, but you can do it more intuitively using AoneFlow’s visual tools.

In addition, AoneFlow can uniformly display the status of branches in the code warehouse, such as machine information and operation records of the deployment environment of the corresponding branch.

Alibaba’s AoneFlow is an evolution of branch management that leverages the strengths of TrunkBased and GitFlow.

The advantages of this new branch management method are:

Alibaba Cloud is a No. 1 cloud infrastructure operator in the Asia Pacific region (2019 Gartner) with two data centers in Japan and more than 60 availability zones in the world. Click here for more information about Alibaba Cloud. Alibaba Cloud Japan Official Page