(This article was inspired by "Explanation of the difference between an interpreter and a compiler using a formal language-Qiita". .)

It seems like a simple and clear definition to write this much, but in reality, the above is the definition of ** "broadly defined" **, and classification based on reality requires a little more ingenuity.

[^ 1]: This article assumes a programming language that can be executed on a von Neumann computer. I won't cover it in this article because it gets complicated when I come up with quantum computing.

When I first tried to explain it with a diagram, I was very worried about how to express it, but in the end I got the following Venn diagram. 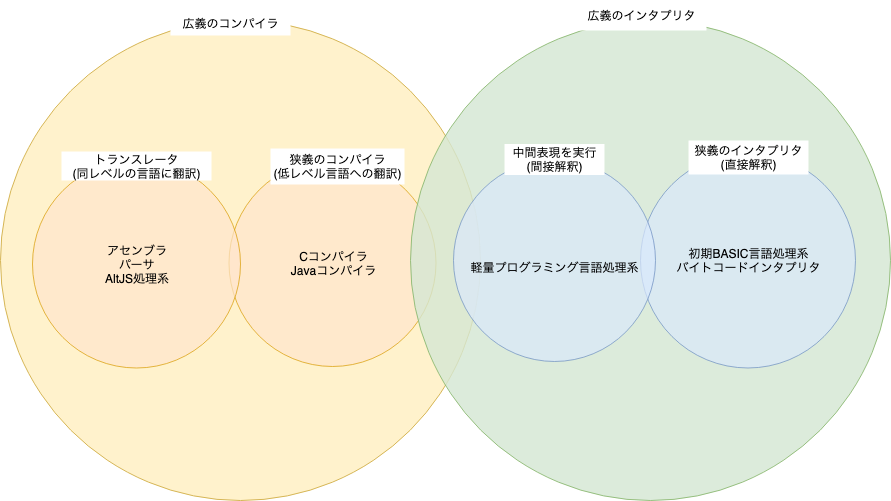 I intended to write it as easily as possible, but I think there are some parts where the intention is difficult to read, so I would like to explain it briefly.

Next, " translator "is a processing system that converts to the same level programming language. It is ambiguous to say "same level", but if you consider only three categories, machine language, bytecode, and other high-level languages, they are roughly the same. The assembler translates assembly language (mnemonics) into machine language, which can be considered a translator because it is about the same level of conversion [^ 2]. The parser refers to the process of converting a programming language into an abstract syntax tree (AST) in this figure, but I think that the parser can also be classified as a translator if AST is regarded as a kind of formal language. [^ 3]. The processing system of AltJS (TypeScript, CoffeeScript, Dart, PureScript, Elm, Scala.js, Opal ...) is also a kind of translator and is often called " transpiler ". These processing systems are alternative languages of JavaScript (origin of AltJS) because the conversion destination language is fixed to JavaScript.

[^ 2]: We don't actually call assemblers "translators" or "compilers" just because they can be conceptually classified that way. [^ 3]: The conversion to the abstract syntax tree does not change the semantics of the original programming language, so I felt it was closer to a translator than a compiler, but it is not a general interpretation.

If you want to implement a modern high-level language processor as an interpreter, you will almost certainly implement a indirect interpretation interpreter. The "indirect interpretation" interpreter is a method of temporarily converting the original source code into an easy-to-execute intermediate representation such as an abstract syntax tree (AST) or bytecode and executing it. This is a typical processing system of so-called lightweight programming languages (LL) such as Python, Ruby, and JavaScript. As some of you may have already noticed, the conversion to "intermediate representation" potentially means that compiler-equivalent processing is implemented in the interpreter. That is why Venn diagrams have broader interpreters and indirect interpretation circles that overlap with the compiler. Especially in recent interpreter processing systems, the bytecode format, for which optimization research is progressing, is often adopted for "intermediate representation", and it is developed by making full use of the technology developed for compilers.

Differences in appearance depending on viewpoint, viewpoint, and visual field

To give an example of Java, Jshell was introduced from Java 9, and since this is a so-called REPL (Read-Eval-Print Loop), it can be seen as a ** interpreter processing system ** from the user's point of view. I will. Also, since Java 11 allows you to execute java files immediately, this is the correct behavior of the interpreter, which is the execution method that lightweight programming languages such as Ruby have been good at.

In this way, programming languages and their processing systems are now greatly evolving, becoming more complex and diversified. As a result, interpreters and compilers are nested, have multiple stages, and have multiple processing systems, so it is very important from which context you are looking at the "compiler" or "interpreter". In other words, what you see as an interpreter from your own point of view may look different from other points of view, so you should pay close attention to the context when talking about it.

In this article, I tried to explain the difference between the interpreter and the compiler using Venn diagrams. The summary is as follows.

The Venn diagram also organizes modern interpreters and compilers in a rational and intuitive way to make them easier to understand, while also respecting historical interpretations. The overlapping of circles is also devised to express that the upper layer may include the lower layer.

We hope this article will help you better understand your interpreter and compiler, and help you discover new things.