To execute a thread in Java, use a subclass that inherits the Thread class, and There is a method using a subclass that implements the Runnable interface. This time, the latter is taken as an example for a brief explanation of the lambda expression.

What is the relationship between the Thread class and the Runnable interface? The Strategy pattern design of the GoF design pattern is used. Roughly speaking, the Strategy pattern is designed to "realize a replaceable algorithm". The class that was originally one is in charge of the overall flow of processing, Let's divide it into classes that are in charge of specific algorithms. By using the Strategy pattern, with the user (Thread class) The side to be used (the class that realizes the Runnable interface) Since it does not have to be directly related, it is possible to realize an algorithm that can be replaced later. (For those who want to know more about Strategy patterns, see here) 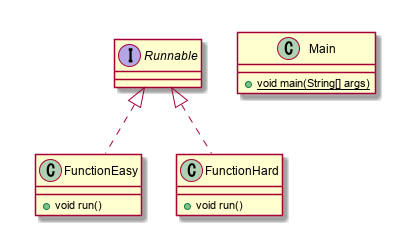 New classes one by one, even with simple code Isn't it annoying to have to define? about it.

You only need one line like this. Refreshing! Lambda expressions are "when instantiating a functional interface You can think of it as "a notation that does not require complicated writing."

An interface that has only one method that needs to be implemented is called a "functional interface" It is also called "SAM (Single Abstarct Method) interface".

As you can see from SAM, it has only one abstract method, so Which method does the lambda expression implement? What about arguments and return values? Inference is possible. There is no need to decide the method name one by one. Polymorphism can be realized without preparing a class that realizes the interface.

It's long and unreadable.

With the advent of lambda expressions in Java8, it's easier to write them.

A lambda expression declaration consists of an argument variable declaration and a processing block as shown below.

Some lambda expressions can be omitted. Let's follow the following prototype as an example.

Also, if the method body is one line, you can omit the curly braces "{}" and the semicolon ";" at the end of the sentence. In the case of return statement, return can also be omitted.

** A variable with the same name as the local variable declared in the method cannot be used as the argument name of the lambda expression. ** ** The following will result in a compile error.

Since the variable name a has already been declared as a local variable, it cannot be used as an argument name for a lambda expression.

"Substantially final" means a variable that does not change even if it is not qualified with final. If you change the value of a local variable in a lambda expression as shown below, a compile error will occur.

The Collection API has many default methods for manipulating List and Map.

For example, java.util.List has a method called * removeIf (Predicate filter) * to remove the element that matches the filter. If you use a lambda expression, you only need one line.

There are many web applications that run on Java 8 on the server side. Therefore, I think that the lambda expression & Stream API is inevitable knowledge when doing Java now. Nevertheless, it seems that there are some things that are not taught in Java newcomer training, so I tried to summarize it as easily as possible for newcomers. I'm sorry if there is a part that is difficult to understand.

Next time, I will summarize the introduction to Stream API around the next week.