The reason for writing an article (preface)

I want to output something, I want to develop the ability to communicate well! I want to improve my writing skills! I thought about writing for various reasons such as. (I can't really say I want a lot of LGTM) If you like it, please push it and go home ♪

In this article, I will only describe the knowledge that I re-understood with the feeling of "Hey, was that so?" Please note that this article is not intended for those who want to cover the basics. Also, I would appreciate it if you could point out any mistakes m (_ _ "m)

The link I referred to this time is also posted at the end of this article. I want to know more details! Please refer to that for those who are.

From the conclusion, The opportunity for me to relearn the basics came from one red shame ♪

Please read the following if you are free! (^^)!

I started programming in April a year ago! I was completely inexperienced, when I was an amateur who didn't even understand how the html table works (ﾟ Д ﾟ) I can't do it better than others in the training. .. The first site was an integration test, and I was actually allowed to do the coding around mid-January this year. I was rushed to the site with my basic knowledge halfway, and I didn't know right or left, so I caused trouble to my seniors so much that I couldn't fit with both hands (~ _ ~;) Although I am such a person, I coded with a complete sense while being taught, and for about half a year, my seniors said, "Why don't you help educate newcomers if you like Chibi Maro?" \ (^ _ ^) / (I wasn't confident, but I also wanted to experience OUTPUT (* ￣ ▽ ￣)

So when I tried to teach it, I realized that ** I couldn't convey what I was asked ** + ** There were many things I didn't understand because I thought I understood it **. Explaining what I understand doesn't convey well. After all, I was ashamed that my seniors pointed out mistakes in front of my juniors (_ _.) ... Shun

We will start the main subject from here!

There was a thing (specification) called "type inference" in Java!

In Java 10 and later, the data type can be omitted when declaring a variable by using the var keyword. Hmm? ** What do you mean? ** Upon closer examination, I found that it was as follows!

What a surprise! !! Σ (ﾟ Д ﾟ) It seems that the Java side (compiler) automatically infers what type ** it is from the initial value and automatically specifies the type (type inference) without specifying the data type of String or int. is! However, please note that "a thing that specifies a type once cannot be replaced with another type". You can see it by looking at the following. Looking at the above example, the type of the variable to which "Hello World!" Is assigned is String as a result of inference. Since the variable "sampleWord" is determined to be a String at the time of declaration, an int type value cannot be assigned.

There are the following points to note when using other vars.

Data types don't have to be remembered in detail!

There are two main types of data.

Let's start with a light explanation from primitive types

To explain in detail, there is a rule that each integer type is up to ~ digits.

Integer type byte is a byte unit. You can assign a larger number for int than for short. You can substitute a number whose long is larger than int. About (laughs)

The small number of digits will be a hit as soon as you google. (In my case, I've only used int for integer types)

Floating point is similar to integer type. You can assign a number that is larger for double than for float.

Even if you don't memorize it completely, you can just google it if you know the mechanism and existence to some extent. The net is convenient (* ￣ ▽ ￣)

** Reference type ⇒ Interfaces will be described later in the chapter on inheritance and interfaces. ** ** 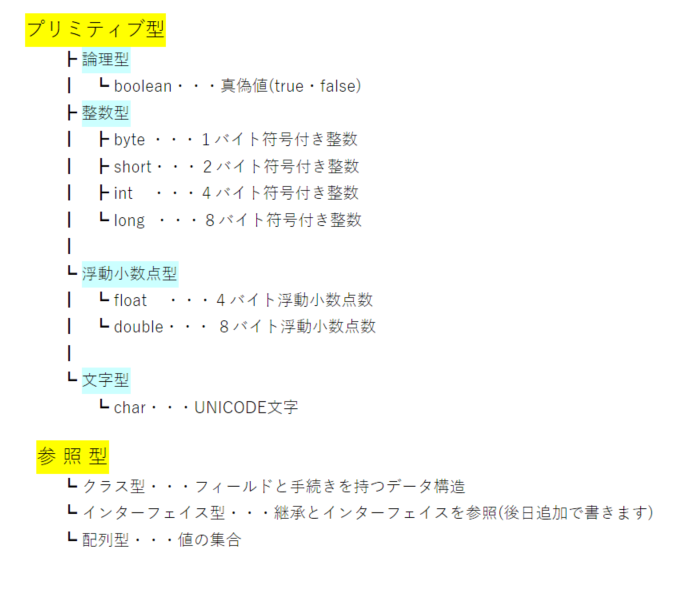