Build a Node-RED environment with Docker to move and understand

This article is the 20th day article of Node-RED Advent Calendar 2020.

This time, I would like to supplement and explain the LT that was held at the Node-RED UG Study Group 2020 End Online LT Party that I had previously spoken. I couldn't give a brief overview on the day due to time constraints, but I will introduce how to build a Node-RED environment with Docker with sample sources.

Move for the time being

First of all, I will introduce the method to operate Node-RED at least. In the official documentation, the command looks like this:

Here's a description of the command content for docker beginners so you can understand what's going on. However, it is a writing style that is likely to be typed every time the same command is executed. You can write a script so that it can be executed every time, but here I will use ** Docker Compose ** to behave like Docker. Docker Compose will bring out the necessary files by defining the service in YAML, but the command to execute the application will be simple. The above execution command is transcribed into YAML as follows. Be sure to name the file docker-compose.yaml.

The number of lines has increased and the description has increased, but I think it is easier to understand what you are doing than the previous command.

Save the created docker-compose.yaml in an appropriate directory, move to the destination of the YAML file in the terminal, and execute the following command.

Now you can use Node-RED by automatically installing and executing the image. You can stop the container with Ctrl + C. 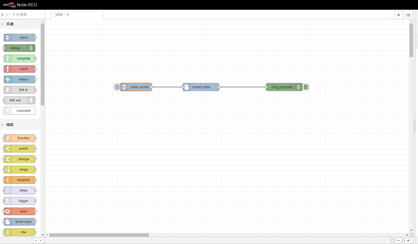 The difference from the previous YAML is that it includes the volumes option. It means sharing the / data directory of the docker container with the same directory as docker-compose.yaml. After making modifications and running docker-compose up, a Node-RED config file will be generated (or rather duplicated?). Now, even if you break the container, the configuration file will remain at hand.

I was able to run Node-RED with Docker, and I still have the configuration file at hand. Now you can build a development environment for your own node. If you use Docker, it will not be affected by environment dependence, so I think it will be an advantage when you create your own node. Rather, I chose Docker because I wanted to build an environment for developing my own nodes.

Create a development directory for your own node (here node-red-contrib-example-lower-case) on the same directory as docker-compose.yaml. After that, prepare the necessary files in First Node Development in the Node-RED documentation.

--package.json * This will explain how to prepare later

Create a package.json that goes into the Node-RED container and describes the contents of the npm module. You can't put it in the container without docker-compose up, so execute it in advance.

When you run npm init, you will be asked some questions, but the module name is node-red-contrib-example-lower-case, and the rest can be set as you like. When package.json is generated, write the following contents in the same way as the procedure in the document.

When you finish the installation, restart the container and reload the browser, if lower-case is displayed in the function category in the node list on the left, you can check the operation of your own node. ..

The self-made node library node-red-contrib-tello created in the Docker development environment has been released. I tried to make it easy to operate Tello, which is familiar with Tello, with Node-RED, so if you are using Tello, please install it!