I made a Wrapper that calls KNP from Java

Recently, the wave of Deep is rushing to the NLP area, so some people may say, "I don't use KNP these days." However, if you don't have decent data and you can't use common methods, or if you want to try the rule-based results before trying the deep method, there are plenty of case analysis results and various features. KNP is still useful because it gives you a lot of information.

On the other hand, it can't be used as a library like Sudachi, so it can be a hassle to use in a program (especially in languages other than Python with pyKNP).

~~ In addition, although we have confirmed the operation to some extent, there is a possibility that problems will occur because we have not written a proper test ~~

It's almost as README.md on github.

Give various settings with KnpWrapperBuilder and generate & start KnpWrapper for the first time withstart (). For setJumanCommand and setKnpCommand, give the same command as given to ProcessBuilder. Depending on the environment, it may be possible to execute with only the JUMAN and KNP paths. (In my environment, I had to call JUMANPP, KNP on WSL, so I gave a command like the above example)

For settings other than setResultParser (), the contents of the above example are the default values.

Set up multiple processes and reuse them. The number of processes that can be set up at the same time can be freely set for each of JUMAN and KNP.

There is a server mode for JUMAN and KNP, but this is not currently supported (will be supported in the future).

Basically, it is assumed that it will not be used, but when ʻIOException or ʻInterruptedException occurs in a series of processes, the process in which the exception occurred is terminated, and another process tries to analyze again.

Any Parser that implements the ResultParser interface can be used as the output Parser. The following two types of methods are defined in ResultParser.

Check if it is faster than the single process

Change jumanMaxNum, knpMaxNum with the code below and compare the execution time (ms). Also, in the experimental environment, the CPU is Ryzen 7 3700x and the heap size is 32GB.

In the experimental environment, WSL's JUMAN and KNP are called. (WSL is said to be slow IO, so it may be a little faster in other environments?)

For the time being, I found that both JUMAN and KNP are faster when KNP is executed in multiple processes than when they are executed in a single process. On the other hand, unlike KNP, which is a bottleneck, the JUMAN side seems to slow down if it is increased too much.

In order to see how much the result differs depending on the number of JUMAN and KNP processes, the number of texts was increased from 100 to 500 and the following combinations were additionally measured.

Also, try the result of typing the following command on the WSL terminal.

It's fun to see the CPU spinning around 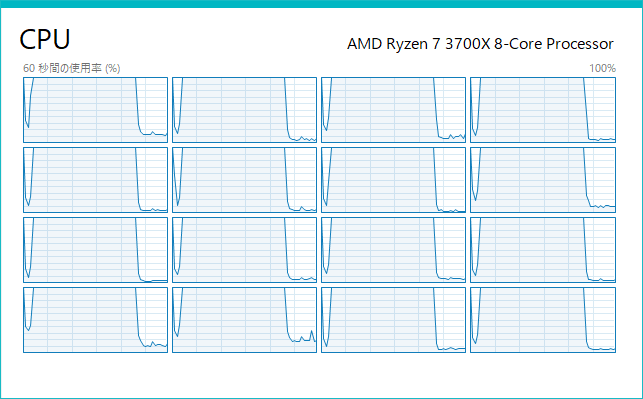 I made a Wrapper that calls KNP from Java
I made a class that can use JUMAN and KNP from Java
I made a shopify app @java
I made a mod that instantly calls a vehicle with Minecraft
I made a new Java deployment tool
I made a primality test program in Java
I tried hitting a Java method from ABCL
I made a rock-paper-scissors game in Java (CLI)
I made a viewer app that displays a PDF
I wrote a test code (Junit & mockit) for the code that calls the AWS API (Java)
I made roulette in Java.
[Beginner] I made a program to sell cakes in Java
I made a Dockerfile to start Glassfish 5 using Oracle Java
I made a JAVA framework "numatrix" that easily generates unique numbers in a distributed environment & multithreading.
I made a program in Java that solves the traveling salesman problem with a genetic algorithm
A story that I struggled to challenge a competition professional with Java
Ruby: I made a FizzBuzz program!
I created a PDF in Java.
I made a GUI with Swing
[Java] Precautions when creating a process that calls a method of Abstract class using DI from a child class
[Note] What I learned in half a year from inexperienced (Java)
Run a batch file from Java
Access Teradata from a Java application
I wrote a Stalin sort that feels like a mess in Java
I made a source that automatically generates JPA Entity class files
I made a question that can be used for a technical interview
I made a method to ask for Premium Friday (Java 8 version)
I made a simple recommendation function.
[Note] What I learned in half a year from inexperienced (Java) (3)
I made a matching app (Android app)
A story that I finally understood Java for statement as a non-engineer
I made a package.xml generation tool.
[Android] I made a pedometer app.
I tried learning Java with a series that beginners can understand clearly
[LINE BOT] I made a ramen BOT with Java (Maven) + Heroku + Spring Boot (1)
I made a class that automatically generates Json that specifies Minecraft texture etc. [1.12.2]
I made a site that summarizes information on carbohydrate restriction with Vue.js
[Ruby] I made a simple Ping client
A program that calculates factorials from 2 to 100
Try running a Kubernetes Job from Java
I made a plugin for IntelliJ IDEA
I made a calculator app on Android
I made a rock-paper-scissors app with android
What I learned from Java monetary calculation
I made a bulletin board using Docker 1
If a person from Java learns PHP
I will expose the fucking app that I made hard to get a job as an engineer from inexperienced.
I tried to make a program that searches for the target class from the process that is overloaded with Java
I made a THETA API client that can be used for plug-in development
Learn Java with Progate → I will explain because I made a basic game myself
I had a hard time doing Java multithreading from scratch, so organize it
Connect to Aurora (MySQL) from a Java application
04. I made a front end with SpringBoot + Thymeleaf
I made a mosaic art with Pokemon images
java I tried to break a simple block
To become a VB.net programmer from a Java shop
I did Java to make (a == 1 && a == 2 && a == 3) always true
I made a gender selection column with enum
Programming beginners learn PHP from a Java perspective-variables-
I wrote a primality test program in Java
I made a Docker container to run Maven