[JAVA] How to implement optimistic locking in REST API

Changing the state of a resource is an operation implemented on any system. At this time, considering the guarantee of integrity, some kind of locking mechanism is required.

Here, referring to Zalando, we will ensure consistency by optimistic locking when updating the RESTful API. Let's see what the idea is in that case. After that, we will consider what would happen if optimistic locking was actually implemented, and the parts that are not clearly stated in Zalando.

How to implement optimistic lock

Let's see how these four achieve optimistic locking in the case of getting list information via API and updating one of them.

The update flow and optimistic lock flow are shown in the figure below. Return with ʻEtag header Check the match / mismatch between the value returned to the client side in the part and the value given to ʻIf-Match in Update with the ʻIf-Match header, and see the API server Is deciding whether to update. 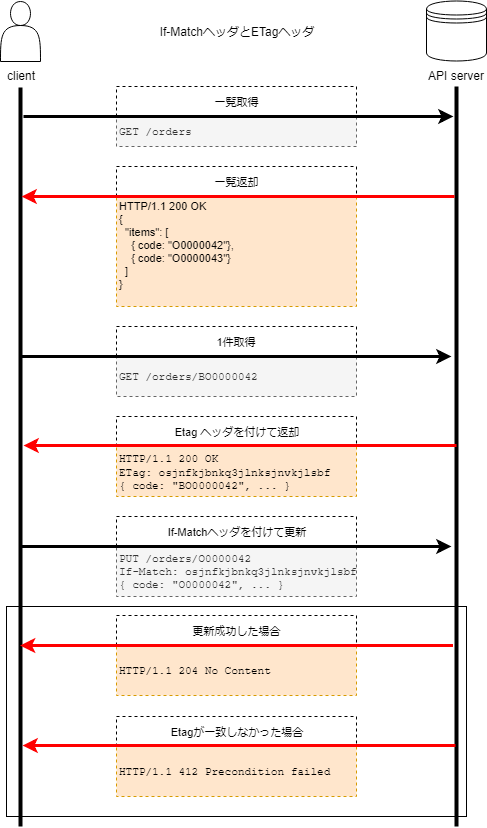 ETags in the result entity

The update flow and optimistic lock flow are shown in the figure below. Use Return list to get all the resources associated with the corresponding endpoint. At that time, set the value of each resource to seed, create an etag with some algorithm, and include it in the response. In API server, update is possible depending on whether the value given to ʻIf-Match in update with the ʻIf-Match header is the same as the recalculated etag value of the resource for which the update was requested. To judge. 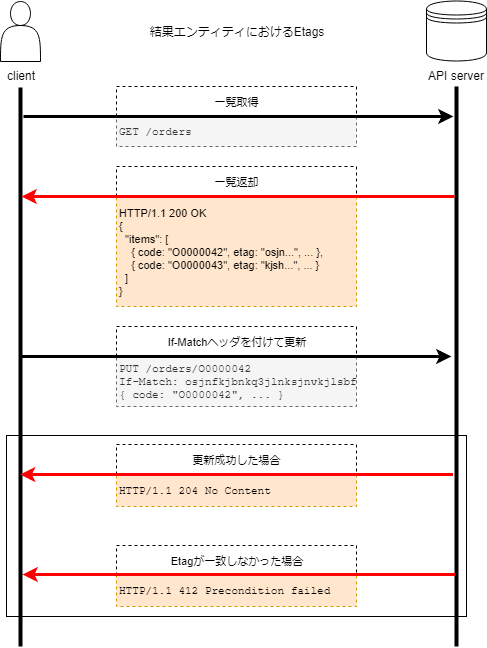 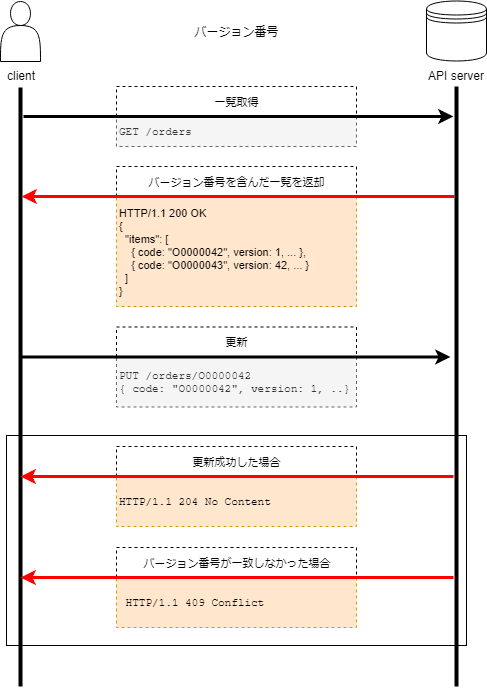 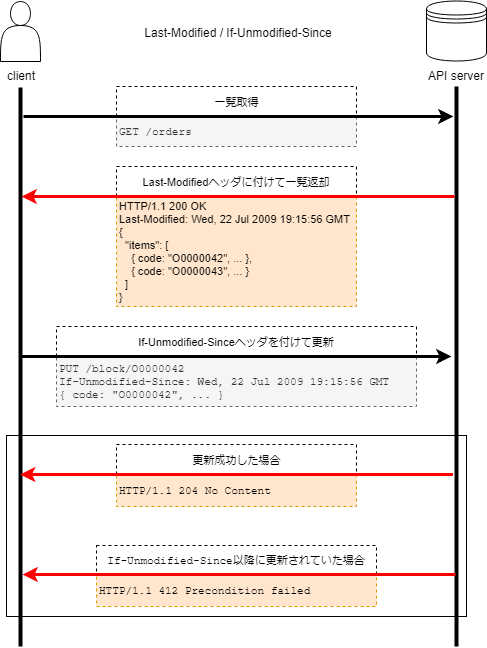 Pros / Cons of each method

The following source implements list acquisition and update with the endpoint ʻoptimistic / etag`. https://github.com/nannany/optimistic-lock-demo ETag generation is done with sha256 as follows.

As shown in the gif below, if the ETag values match, the update is successful, and if they do not match, 409 is returned.

The following source implements list acquisition and update with the endpoint ʻoptimistic / lastModify`. https://github.com/nannany/optimistic-lock-demo The date and time when the list was acquired is entered in the last update date and time, and optimistic locking is performed depending on whether the resource has been updated since then.

As shown in the gif below, if the last modified date and time of the resource to be updated is before the date and time received in the ʻIf-Unmodified-Since` header, the update is successful, otherwise 412 is returned.

Let's consider some of the optimistic locking techniques that are not specified in Zalando.

We believe that the differences between the advantages and disadvantages of these two methods are the following two points.

Should the API server retain the element to detect optimistic locks?

When thinking about how to simplify the persistence information and what to do with the performance, I think this is a merit and demerit.

Difficulty of analogy of the value to judge whether to update

When thinking about security, I think this is a merit and demerit.

About the security aspect of Last-Modified / If-Unmodified-Since

Therefore, from a security perspective, I don't think Last-Modified / If-Unmodified-Since is strong.

I looked at the optimistic locking method listed in Zalando, but in the end I thought I had no choice but to think of a method that should be taken according to the requirements of the system I was building. The fact that Zalando also introduces four methods means that the best optimistic lock implementation method has not been devised for every system.

However, instead of thinking about how to implement the optimistic lock of RESTful API from 0, it is recommended to implement it while referring to the description of Zalando etc. and applying the introduced advantages and disadvantages to your system and investigating it. Isn't it a realistic solution?