The other day, when I asked the past question of the programming contest with haskell, when I wrote the logic to manage the exponentiation, I wanted the final result to be 12340000, but it didn't pass because it was 12340000.0. It's embarrassing.

It's embarrassing, but listening is also a commentary on shame for a lifetime, and what you don't know can be done if you learn and master it obediently. Can't you?

I'm not sure, but in short, it's a story about putting together things like ʻint` that I used in an ambiguous way.

I usually make a contract management system with java / DDD, but the numbers I handle are only tens of thousands of integers. It's a little yen, counting the number of contracts, and so on. There is no daily billing for the month. I'm surprised.

So, just before writing this article, for example, the level of understanding of java is like this.

The degree of understanding. This is serious.

(I only knew that double Italian was doppio)

So just acknowledge that that many people put it together!

Thank you for the haskell version

Java is used as the confirmation language for this article.

Originally I checked it with haskell, but I thought that it would be better to check some languages, so I also tried it with java.

I checked it a little with python, but I think I'll use haskell in my book and java used at work.

So, thank you for your cooperation. → Understand the difference between Haskell Int and Integer, Float, Double and Rational

Before we get into programming, let's talk about math.

Even if you say mathematics, scary things like algebra and category theory do not come out. I'm scared too. It's about junior high school.

Look at this first. 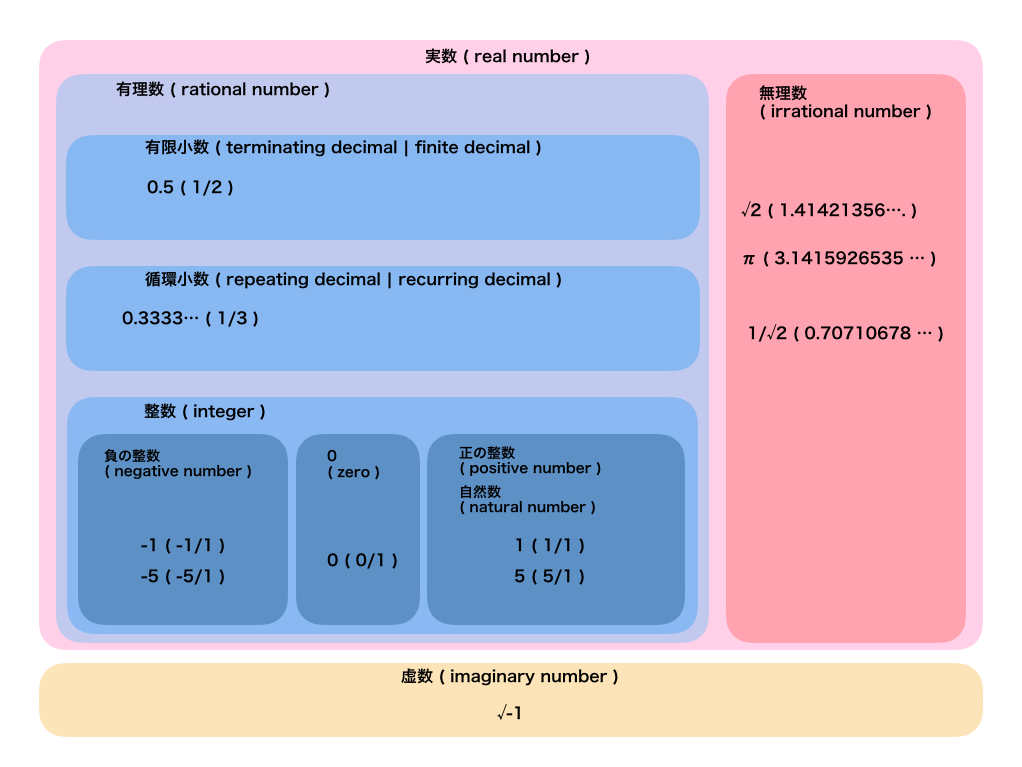 I will explain it roughly.

The numbers you usually see are usually real numbers.

On the other hand, imaginary number is a number invented because it is convenient, but it does not exist in reality. A typical example is √-1 or it is expressed as ʻi`. It's easy to understand. I'm not sure.

The imaginary number is ** a number that squares to a real number less than 0 **, and the real number is defined as ** otherwise **.

I don't want to think about it in detail, so it's okay to use "about a real number".

The classification of real numbers is taken seriously.

On the other hand, other numbers ** that cannot be expressed by the ratio of integers are called irrational numbers.

Both are rational numbers.

There is no need to explain integer. 3 can be expressed as 3/1, so it is a rational number.

A finite decimal is a decimal with an end, such as 0.5. It can be expressed as a ratio of integer such as 1/2`.

Integer is the most familiar, so I don't think it's a problem, but for the time being.

The same is true for positive integers.

Also, a positive integer is called a natural number. (It doesn't matter if you include 0 in this article)

A supplement for decimals and fractions.

Fraction is a number expressed by ** ratio of numbers **, and at first glance it seems to be the same as rational number. However, since rational numbers are ** ratios of integers **, fractions are a broader concept.

Also, for example, there is a infinite decimal, but in the previous figure, both therecurring decimaland the irrational decimal of the rational number are infinite decimals. It's the difference between circulating and non-circulating.

English you want to keep

While keeping the above points in mind, we programmers need to know English words, so we will summarize them roughly. (Although English is also included in the picture.)

Since ratio means ratio, some people may have used it in variable names.

Also, although not in the picture, decimal is decimal and fraction is fraction.

To the world of programming (java)

I'd like to see the sample code in java at once, but there are big differences between the human world and the computer world.

That is, "memory is finite".

Where it is related is, for example, "great deke number" and "infinite decimal number".

Due to the limited memory of the computer, the numbers are limited to the range of 32 0 | 1.

On the other hand, multi-precision integer ** is a numerical expression method that dynamically allocates memory according to the number to be handled.

In theory, you can handle an infinite number. (Of course, as long as computer memory allows.)

This fixed-length integer causes the overflow that everyone loves.

For example, the byte in java is an 8-bit fixed integer. The first bit is used as the sign for positive and negative signs, and the rest is used for expressing the value. 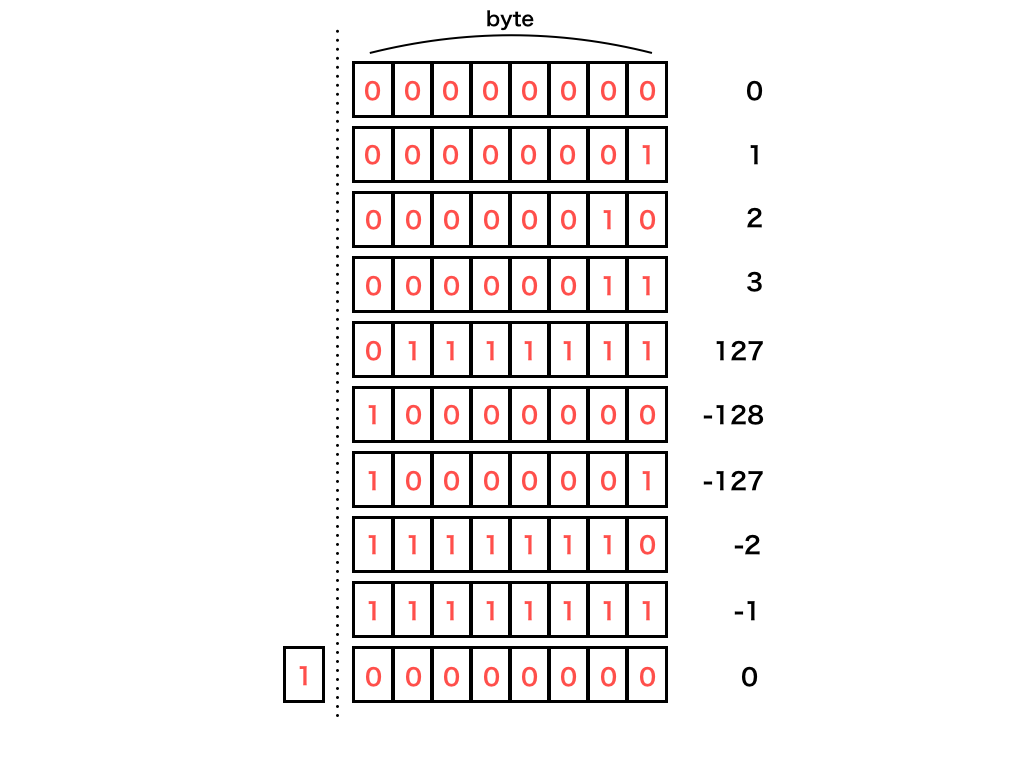 On the other hand, BigInteger is a multiple-precision integer. When an overflow is about to occur, it dynamically allocates memory so it won't overflow. 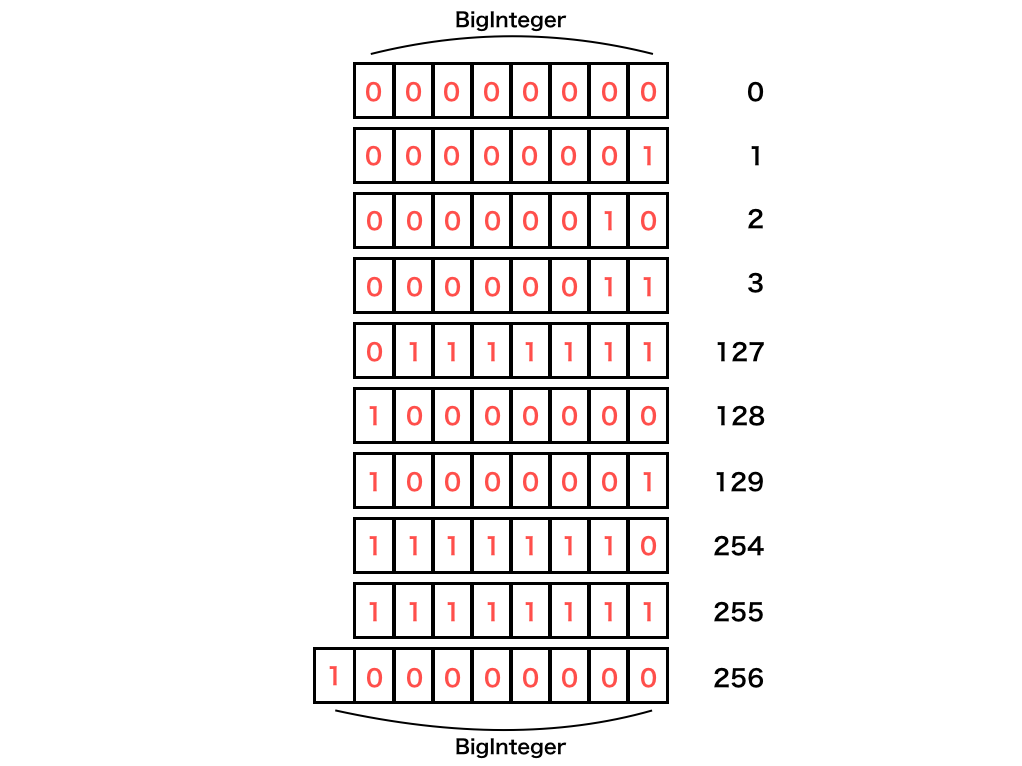 (The above figure is an image because it depends on the mounting method for holding the code and value.)

There is a similar idea for decimals as well as for integers.

This is the one with ʻe` that sometimes appears when writing code. I was scared but I overcame it.

I wonder if it is called floating point because the position to put the decimal point changes depending on the mantissa part and the exponent part. On the other hand, the paired word is fixed point, which includes, for example,integer.

The introduction has become longer. From here, we will check with Gashigashi java.

The code below omits the System.out.println equivalent and the comment on that line is the result.

byte, short, int, long There are many, but don't be afraid.

These are all fixed-length integers, and the only difference is the precision that can be expressed.

For example, if you enter + 1 to the upper limit of ʻInteger`, it will overflow.

And of course, casting from less accurate to more accurate is fine, but not the other way around.

By the way, the difference between int and Integer

It's different from the original purpose, but it's unexpectedly interesting, so I'd like to say it.

In java, ʻint is a primitive type and ʻInteger is a class type.

The main differences are, roughly speaking, "ʻint does not allow null "and" ʻint cannot be T such as List <T>". There is no difference between ʻint and ʻInteger in terms of accuracy. This is important.

Also, java has a mechanism that the compiler does a good job of converting each other, so in most cases you don't have to worry too much about either.

Talking about memory before mutual conversion

You may not think too much about it, but I will explain the stack area and heap area very roughly.

For example, if you write code like this. (To make it easier to distinguish between ʻint and ʻInteger variables, ** this article uses uppercase letters at the beginning of the variable name.) 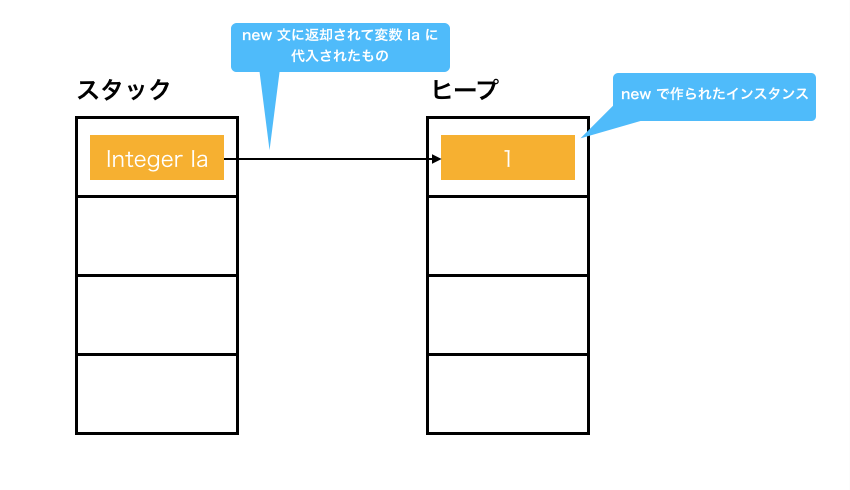 If you do new, something will be put in the variable ʻIa in the stack area. Somehow I feel that ʻIa contains the instance itself, but only the ** arrow ** contains it. To put it horribly, it's a ** pointer **.

The created instance is in the heap area.

On the other hand, the primitive type ʻint` is reserved as it is in the stack area.

So if you write this code, the picture will look like the one below. 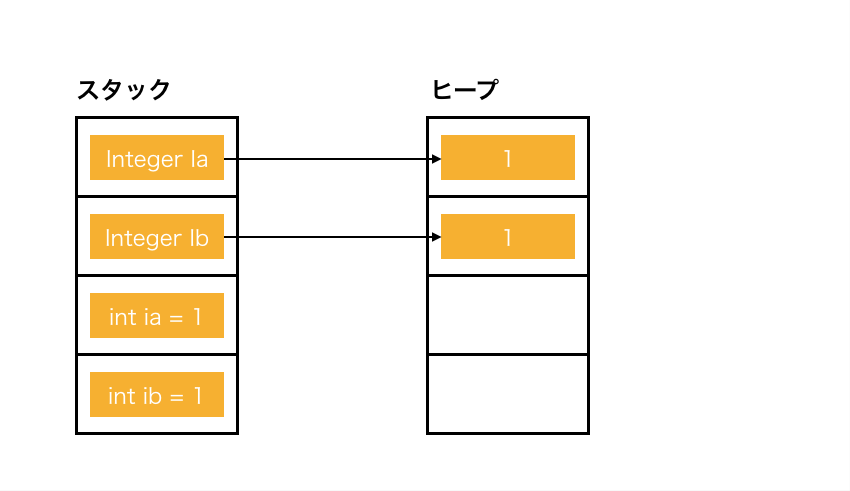 I'm sure there are a lot of people who have been angry with scary people saying, "Don't use==for comparison in java", but let's see why.

In a class type, identity is ** the same instance **, and equivalence is ** the same value **. The former is done by == and the latter by ʻequals`. Equivalence also depends on the implementation. (For example, when comparing DDD entities, only identity matches may be considered equivalent.) 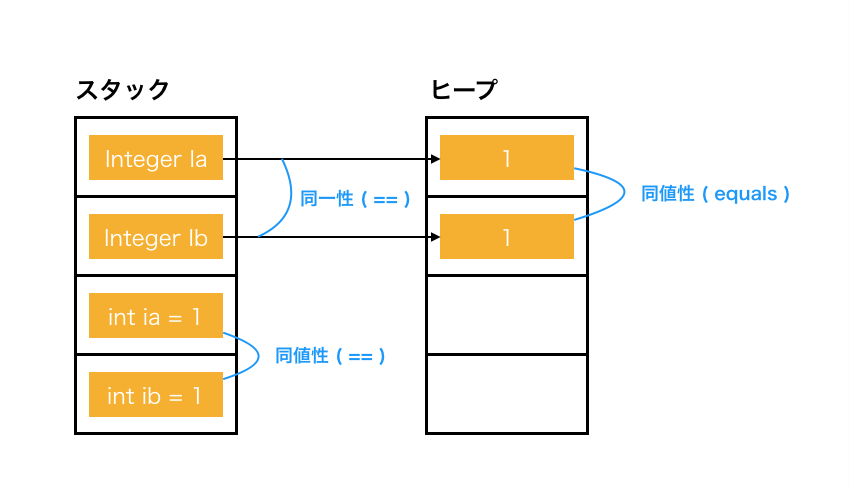 So ʻIa == Ib is ** false ** because it is an arrow with a different destination. ʻIa.equals (Ib) is ** true ** because the destination values are the same.

Now that you understand the stack area, heap area, and comparison, it's about mutual conversion.

The following code can be executed by ** auto boxing | auto unboxing **. 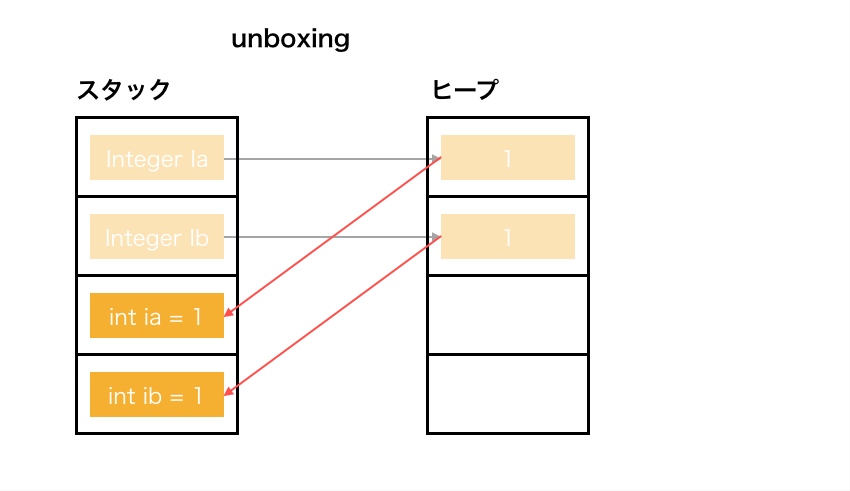 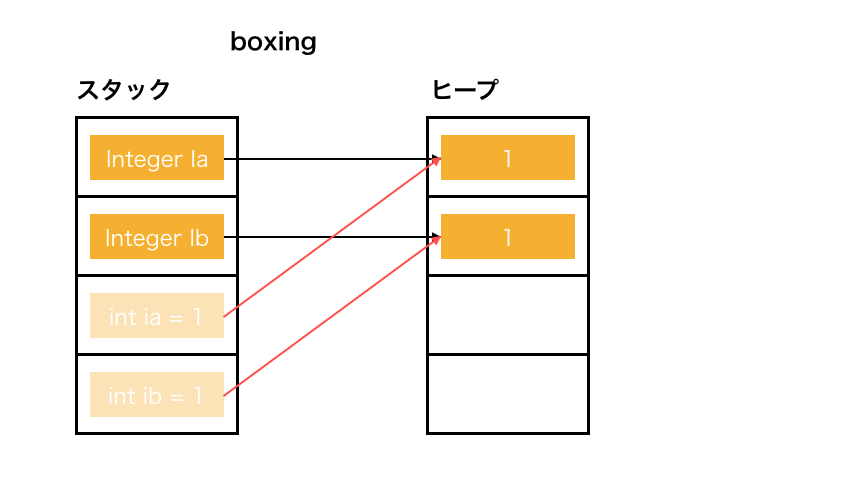 Internally, values are brought to the stack area, and instances are created in the heap area to obtain references. (Actually, the original value does not disappear, but it is thin because it is easy to imagine.)

Now, which of the following code would be true or false?

The arrows for ʻIa and ʻIb should be different as they are new by ** auto boxing **. This is also the case in the picture above.

But this is true.

So, the essential ʻInteger # valueOf`, but it is implemented like this.

Apparently, the frequently used -128 ~ 127 seems to be cached. So in the above code example, it is not new.

With such a code, it will be false properly, it seems that the understanding was correct and it is safe.

Summary of differences between int and Integer

In this article, ʻint and ʻInteger and float and Float have no difference in accuracy, so we will use the one that is convenient for you in the sample code without notice.

float, double You've held down the integer. Next is the decimal number.

I was wondering what the double is, but it's clear if you study. It was said that float uses 32bit and double uses 64bit to represent the value. So double precision.

Since the memory of a computer is finite, it is impossible to completely represent a infinite decimal number, so it must be treated on the assumption that an error will occur.

So what kind of error will occur? Let's try it.

The conversion between float and double, like short and ʻint`, breaks when converted from the higher precision to the lower precision.

If you change from double to float, it's missing.

Also, since it is finite in the first place, an error will simply occur with the following values.

BigInteger, BigDecimal Thank you for waiting, the multi-length guys.

They allocate memory dynamically according to the digits, so there is no overflow and no error. Somehow amazing.

Let's try it right away.

BigDecimal Try from the Big Decimal of the decimal. Let's deal generously with huge integers from the beginning.

Even if it is added to the upper limit of long, it does not overflow. It's okay to add more boldly.

You can also add decimal numbers.

favorite? What about the decimal error of?

I saw the word terminating in something like Ben's figure at the beginning, and I'm angry that it's not a finite decimal.

BigInteger This guy is easy. It is a Big Decimal that cannot handle decimals.

BigInteger doesn't have a generation method that allows you to pass a decimal like 0.5, so it's "only this" compared to BigDecimal.

It's all right now. Not scary.

But if you understand that you may reallocate memory each time you add`, it's easy to think of creating a non-destructive, different instance each time. (It depends on the implementation method, so it may be immutable, but it may be mutable.)

It's been a long article, but there are only three main points of numerical expression in java that I felt after trying it!

That's it! The difference between ʻint and ʻInteger is that I'll do my best to study java rather than numerical expression!

Anyway, I learned a lot. I was keenly aware of how well I usually came.

And what to do if you understand this is that you want to separate it from the domain logic, so create a value object and hide it! I understand it exactly, so I don't use it in my daily work (domain implementation)! What a paradox!