Things to remember and concepts in the Ruby on Rails tutorial

I studied Rails to change jobs to a web-based in-house development company! As part of that study, I'm doing the 6th edition of the Rails tutorial, and I'll mention that I thought this was __important & __ to remember.

--Those who have done a Rails tutorial but haven't really thought about it ――What can you learn from Rails tutorials? Those who think --Those who want to review and learn the basics of creating apps with Rails I think this article will be helpful!

★ What is a gem? --A Ruby package published by RubyGems --A package management system that manages those packages

__ The asset pipeline is divided into three main functions (below). __ (* Explanation ★ Brief summary)

Sporockets is reading comments like the one above in the manifest file.

★ In short, the assets are put together to make it easier to use in the browser.

Count means that there are two links to root_path and you want to test two.

There are various ways to specify assert_select. Below are some typical examples. 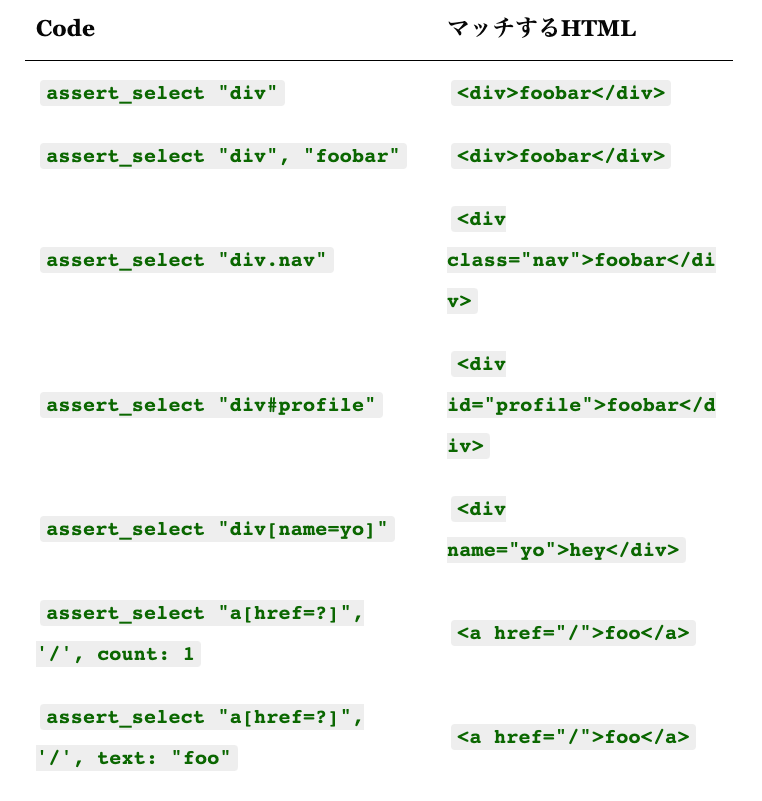 --Rails partials are used for efficiency and you can cut out markup in a separate file. --The Bootstrap framework allows you to quickly implement responsive and good designs --Sass and Asset Pipeline compress redundant parts of CSS (separated for development efficiency) and output production-optimized results --Rails routing allows you to freely define rules, and at that time you can also use named routes. --Integration testing can efficiently simulate page feeling transitions.

Active Record: The default Rails library that interacts with the database

When creating a model, use the command generate model. Example) Creating a User model with attributes such as name and email

--User.create: How to create and save a model at the same time through Active Record

__ How to proceed with test-driven development testing __

rails test: models: Command to run only tests on models

The migration name can be specified freely. By specifying the end (to_users), Rails will automatically create a migration that adds columns to the users table.

--Active Record gives you many methods for creating and manipulating data models --Active Record Validation allows you to add limits to your model --Common Validations are "Does it exist?" "Length" "Format" --Adding an index to the database will dramatically improve search efficiency, and you can use the index to ensure uniqueness at the database level.

"Shared": Partials used by multiple views are in a dedicated directory

--Significant debug information can be displayed by using the debug method. --By using the mixin function of Sass, you can put together CSS rules and use the CSS information specified by the mixin in other places like variables. --Rails makes it easy to manage data through standard RESTful URLs --form_with helper creates a form for Active Record objects --You can use the flash variable to display a temporary message --Integration testing can be used to verify the behavior of submission forms and detect the occurrence of bugs.

--_ __ HTTP is a stateless protocol __ --A protocol without state management --It is treated as an independent transaction (processing) without using the information of the previous and next requests at all. --So there is no "means" to hold information such as user ID in the HTTP protocol.

--When managing user information etc. on the Web application, it is necessary to separately set a semi-persistent connection between the client and server in "Session".

Ruby is designed to look at nil and false and make every object true. In Ruby||When using several operators in a row in an expression, it is designed to evaluate the terms in order from the left and finish the process when it first becomes true. This evaluation method is called short-circuit evaluation.

The __ && __ operator has a similar design, except that the term is evaluated from the left and the process ends when it first becomes false.

It can be simplified as follows.

For pure Ruby code that doesn't deal with DB

"There are 10 kinds of people in this world. Some people can understand binary and some can't understand binary" is a joke that has been passed down in the industry for a long time. It's like Roland (laughs) Maybe Roland got stuck from here? ??

■ Ternary operator The following if else code

Can be shortened as follows

We often use the ternary operator as the return value of a method.

--In Rails, "state" can be retained at the time of page transition. If you want to keep the page state for a long time, use the `cookies``` method to make it a persistent session. --A persistent session can be realized by associating remember_token and remember_digest for each user. --You can use the `cookies``` method to save cookies etc. in your browser -(Generally) deleting sessions and cookies respectively can achieve user logout

target="_blank"Use to link to a new tab(Or window)This is a useful element when linking to another website because it will open in. ★ Personally, I'm happy with another tab when I jump to the link destination, so when I implement it, I definitely want to implement it! Personally, I think that sites for PCs (assuming PCs are the main clients) should definitely be introduced!

--The user sends a PATCH request to the update action from the edit form to update the information --By using Strong Prameters (params [: foobar]), you can safely change it from the web. --By using the before filter, you can call the method before a specific action 4 is executed (* It's very convenient !! It seems to have various uses !!) --In the Authorization test, we ran two tests: a simple test that sends a specific HTTP request directly, and a difficult test (integration test) that simulates the operation of the browser (the operation that the user actually does). (Personally, thinking about the tests needed to simulate an integration test had to be logical, and it was fun to think constructively.) --Friendly forwarding is absolutely necessary when creating an actual app, so you should remember and actively implement it (UX basically friendly forwarding is essential) --The `rails db: seed``` command flushes the sample data in db / seeds.rb``` into the DB --When you run ``` render @ users```, it will automatically reference the `_user.html.erb``` partial and display each user as a collection. --When you add a boolean admin attribute to your User model, a method that returns a logical object called admin? Is automatically added.

I got an error in test. .. Refer to this teratail article and use the following code

I succeeded by doing the following ~

--Account activation is not an Active Record object, but can be modeled with resources as it is for sessions --Rails can generate Action Mailer actions and views for sending emails --Action Mailer can use both text mail and HTML mail --The instance variables defined in Mailer Action can be referenced from the Mailer view like other actions and views. --Create a unique URL using the generated token to activate your account --SendGrid allows you to send emails from your production environment

--Rails supports multiple key indexes --User has multiple Microposts (has_many) and Micropost depends on one User (belongs_to) --The code user.microposts.build (...) returns the microposts associated with the user given as an argument. --Use the dependent:: destroy option to delete the associated object and itself at the same time. --fitten also supports creating objects using associations --Variables can be passed together when calling a partial --You can select (extract a subset) through Active Record by using the `` `where``` method. * You can get it with the same sentence as the raw SQL statement.

The above code does nothing if @ user is not nil, and assigns current_user to @ user``` if it is nil.

--has_many: through allows you to model complex data relationships --You can pass a number of options to the has_many method, such as class names and foreign keys. --By using has_many / has_many: through with the appropriate class name and foreign key, we were able to model active and passive relationships (following). --Routing can be used nested --where method allows you to create flexible and powerful database queries --Rails can call low-level SQL queries (if needed)

Every other Ruby object is true, even zero.

■! About the exclamation mark ◆ By using the! Mark, you can directly change the data (~ ~ attribute). When not using ★!

◆ You can raise exception by adding! To a method! !! Example with create, save. Without! (Create save) -When the process is executed and record creation / saving fails, `` `nilis returned. When adding! (Create! save!) Exceptions (egActiveRecord :: RecordNotFound ERROR```) can be raised.

■ `private` keyword --Used to define methods that are only used within that file (class) --Methods defined in private cannot be used in other files (classes). --Unexpected errors can be avoided by making methods private that are not used in other files.

■ << Operator (Shovel Operator) <<You can add it to the end of the array with.

It took quite a while. .. It took about a month as a result, although it was accompanied by Cloud9 errors. .. I think it can't be helped because it was quite volumey, but there are people who finish it earlier, so I will finish making Portfolio sooner! !!

Thank you for reading! !!