Easy to understand the difference between Ruby instance method and class method.

Until now, I have not clearly understood the important concepts of Ruby, such as instances and classes, so I will explain them with examples. I think it's something you absolutely must know to use Ruby, but it wasn't easy to understand.

Subject of this article

What is an instance class? 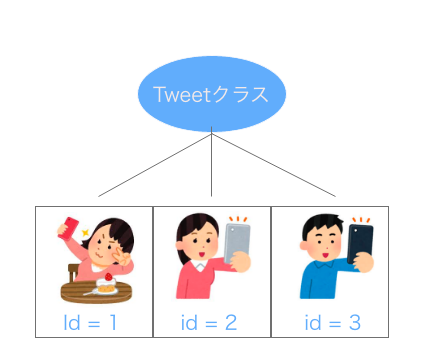 At this time, each post enclosed in a black square is a ** instance **. Instances are said to be objects created from the types of classes. And Tweet is ** class **. An image of an instance belonging to a class. It's an important concept in Ruby! !!

-Call with "class name.method" outside class. (Tweet.tweet in the above example) ・ If you cut yourself, you will get angry. (** declare itself as a class method **) => It can be defined by ** self. method name ~~ end ** in the class. -All, new, etc. are predefined class methods, and you can operate on the class. (All gets all instances of the class, new creates a new instance in the class)

-Call with "instance name.method" outside the class. (In the above example, new_tweet.post_tweet) Since the instance belongs to the class, create an instance with ** class name.new ** and execute the method for that instance. -Basically, I feel that instance methods are often used during implementation.

As I wrote this article, I thought that Ruby was a very easy-to-understand and intuitive design. From now on, I will try to define the method with a strong awareness of the instance class.

Thank you to everyone who read it. If you have any suggestions, please do not hesitate to contact us.