I'm Shione Ueno, who has been programming for half a year. At the school, I was mainly taught how to make Rails apps, and now I am working at Wilico Co., Ltd. while being taken care of as an intern. I'm new to programming and writing, so please let me know if you have any questions.

This time, I would like to write down various things about the portfolio created in the third month of school, although it will be miscellaneous.

It was created assuming a QA site for the development community. See the README on github for details.

There are two main things I wanted to learn this time.

Originally, I decided to ** give a rating to the user → absolutely implement the function of displaying on the chart **. I was interested in AI (data statistics and analysis) as a trigger, so at first I was thinking of doing something using Python, but I rejected it. The reason is

That's why I planned the app while glancing at some sites. The reason why I came up with the QA site was that I could imagine how to set the evaluation criteria.

What I was thinking at the beginning

I was planning to update the user's evaluation in the user table, and other evaluations in association with comments and thread actions, but I got confused on the way and consulted with the school mentor. The big problem, apart from all that, is that ** with this design, it may not be updated properly because it will be updated every time the user operates something **. (There seem to be various ways to avoid it, but I want to dig deeper, so I will omit it)

Data that can be calculated later and data that is frequently updated depending on the user's behavior are not managed in the DB unless there is a reason, so ** Save only the material for analysis and draw the chart It is designed to be calculated at the timing. ** ** 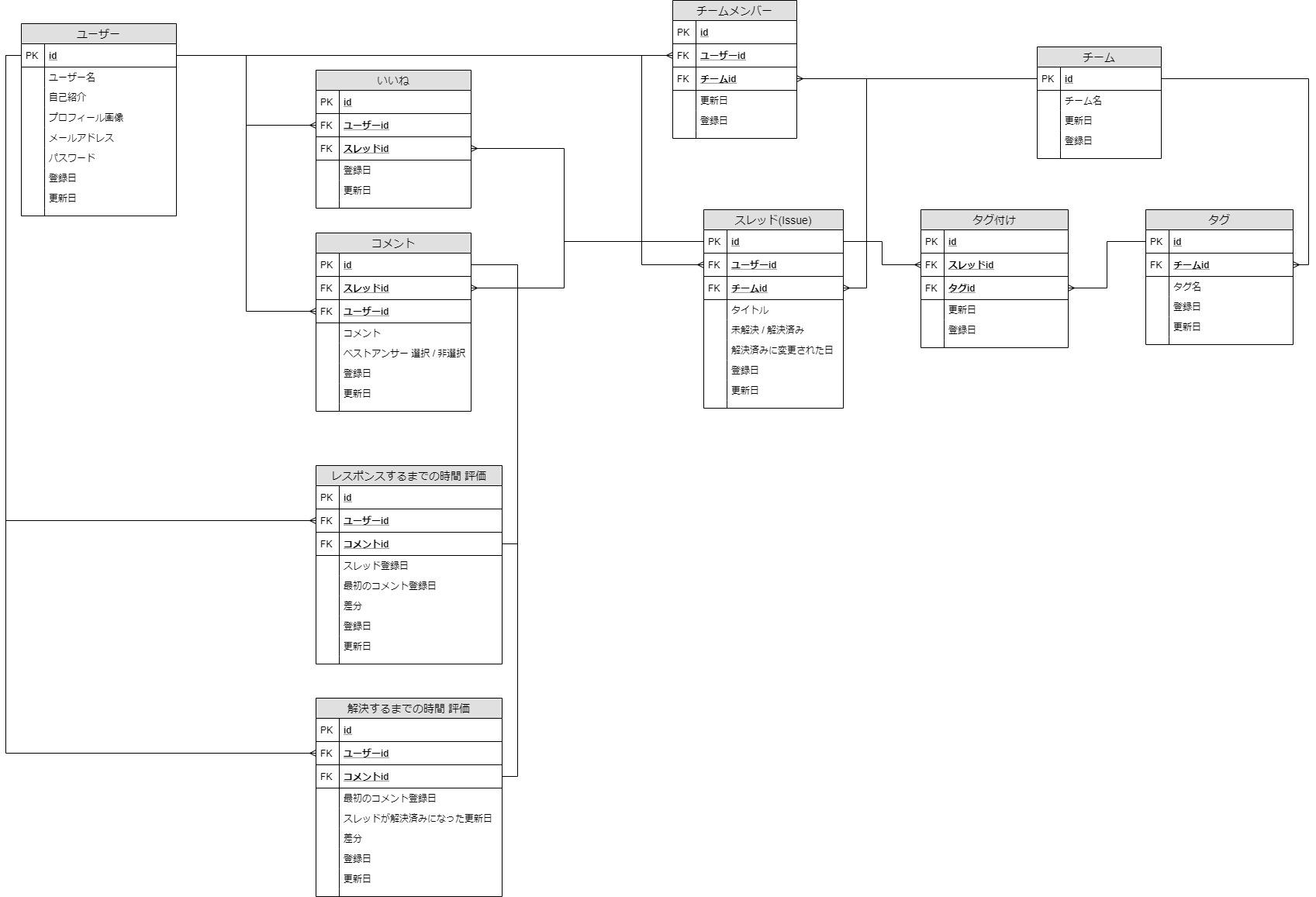 This is the part excluding the chart implementation. I wanted to spend some time on the chart, so I implemented a schedule other than the search function in about a week. Well, I have not implemented difficult functions, so to give an appealing point, : information_desk_person: ** Tagging and search features implemented without gems ** When I looked it up again, I thought, "Maybe it was made with gem ...?", But it was a good exercise (?), So the result is all right: confetti_ball:

As the development process, ~~ What you can do now ~~ → I want to do this! Since I made a plan based on the axis and came to this point, I had almost no plans for detailed implementation in the spirit of doing it. I looked it up, but at that time I was too unfamiliar with js and was on the verge of fainting in agony.

: fearful: << ** What and how can I do this ...? ** ** Even though I thought about the app myself, I came here and quietly despaired in the corner of the classroom.

The big thing I learned at this time was : raised_hands: ** I don't know, the importance of touching something for the first time **

While I was mourning because I didn't understand anything, when I consulted with my school classmates, he told me chart.js codepen. The moment I touch it a little, I can read chart.js so much that it is interesting. I think the main factor was touching the already completed code. You can intuitively understand which value affects the data of which axis, which value affects which design, etc., and if you pass the array here, you will win! I was able to set a goal.

I think it's a bit reckless, but I'm glad I moved to the implementation gracefully because I worked hard on the basic functions to devote man-hours including trial and error (results theory).

Data is exchanged with the js file at gem'gon'. It is basically converted to json format, but it is not included in the learning purpose, and I chose it because I could not read the man-hours of the chart to be implemented and wanted to emphasize speed.

Since the code is a little long, I write it as if only the flow is transmitted: pray: What is the alternative, but I will post a Github link line by line, so please have a look if you are interested. Summarize by evaluation criteria.

:cactus: Questioner/Tags, Answer/Tags There are two items on the donut chart. Since the logic for pulling data is slightly different, we will use Questioner / Tags as an example.

:cactus: Time to response, Time to solved, Total Bar chart and radar chart items. Since the table that pulls the data is different, let's take Time to response as an example. ** Basically this flow except for donut charts. ** Omit detailed processing.

Since it is almost the same as Time to response, only the difference is summarized.

** 1. Mean ** Since the absolute value was not large enough to calculate the average value, ** the total value is calculated. ** The value on the chart was only 0 and did not change: frowning2:

The production period was from February 15th to March 15th, but we deployed the beta version at the beginning of March and received reviews from various people. Thank you: sob:

It ’s also the biggest learning in this portfolio, : wave: ** You can always find the answer by moving your hand! ** ** It was a product that I was convinced of. Read the parameters that can be handled now, build logic based on them, and send the parameters if they are not enough. I think it was a very valuable learning to have gained this from my own experience.

I spent about a week digging into the console screen until I implemented all the charts at a minimum, but the moment I made the logic, the sense of accomplishment was so great that it was fun: v:

When I was researching the portfolio, I couldn't find an article with the same level of feeling as myself because it was just "This is an advantage!", And it was not the material I wanted, so I wrote it.

Of course, I think there is still room for improvement, but since there is no end to it, I think I'll break it up.

I hope it will catch the eye of those who are going to create portfolios and help inspiration even a little: ramen: I also want to see articles like this from various people, so please write them: eyes:

Thank you very much!