I used ListView when creating a GUI application using JavaFx, but I received the following requests.

I had a hard time meeting such a request, so I made a note of the result.

The final move I aimed for was like this. The blue frame is ListView, and when the screen size is smaller than the position where the button is located, a scroll bar appears to indicate that there is a part next to it.

First from the result

The final component configuration was realized as follows. 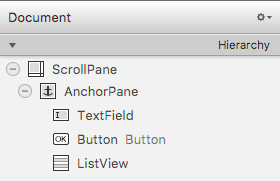 Setting points of each part

AnchorPane -- Layout --` Min Width / Height is set to the window size where you want to start displaying the scroll bar.

The road to realization Step by step

By the following combination, "the size of ListView changes according to the window size" can be realized.

We use Anchor Pane. anchorpaneWhat is

AnchorPane allows the edges of child nodes to be anchored to an offset from the anchor pane's edges.

Regarding the node included in it, it is possible to fix the distance from the end of the parent Anchor Pane.

When I add Control to the child element of Anchor Pane in SceneBulider, Anchor Pane Constraints is displayed in Layout. 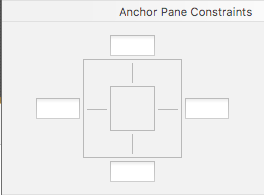 The end of the individual element and the end of the Anchor Pane are fixed by the value (distance) entered in these four text boxes. This is the fixed value only below.

If only one side is fixed, the size of the control is not changed and the display position is changed.

This is the one that fixed the top and bottom.

This time, in order to display the size of ListView as large as possible, it was found that the ListView included in AnchorPane should have fixed values for all four sides of Anchor Pane Constraints.

(Appropriate translation) When> true, if the node contained in it is Risizable, the size of the node changes according to the width of the viewport of the ScrollPane. This value is ignored unless the contained node is Resizable.

So, by putting AnchorPane in ScrollPane and setting `` Fit To Width / Height``` to `true```, the size of ScrollPane (Window size in this case) is changed. The size of Anchor Pane now changes in conjunction with. (AnchorPane, or rather, all JavaFX controls are Resizeable)

Next is "Display a scroll bar when the size of the window becomes smaller than a certain width".

So, I set the size of `Min Width` of Anchor Pane in ScrollPane so that `` `Button``` is not hidden, and it was done.