The title is fishing.

The subject is too big and I'm a little nervous. Now, let's talk about what the title says.

There are various ways to build a development environment.

The lack of uniform means is both a merit and a demerit. (In the sense of freedom)

However, the problem is, "I'm not sure, but it's on Qiita, and it worked, so I'm okay with that procedure."

The software published on OSS is published in a purpose-specific manner. I would like to show myself how to make good use of it.

It's important to note that ** this article isn't bad, it's just that I don't follow these steps **.

So how do you do it?

When I build a Rails project, I take the following steps: First, I will give an overview and then write specific commands.

Start with no Ruby. It is almost the same as "(Ubuntu) Ruby on rails 6.0 environment construction", but the order is different.

At this point, the ruby command, gem command, and bundler command are installed on Ubuntu Linux.

It's still a long way to start developing with Ruby on Rails.

However, in this state, you are ready to start writing Ruby programs.

** The procedure is different from here **

Next, install Node.js, which is required for Rails 6 or later.

By following this procedure, the ruby (2.6.2) and gem commands, node, and yarn commands have been installed on Ubuntu Linux.

With these preparations in place, you're ready to run Rails 6.

Next, create a directory for the project you want to create and set up Rails.

By following these steps, Rails will be available.

Please point out in the comments and mention about --path vendor / bundle when doing bundle install. Starting with Bundler 2.1, the --path option is deprecated (deprecated). Please refer to the description here for how to deal with this point.

I will explain what kind of situation it was

First, the state with the library that is "preparation" is shown as a figure.

These are the libraries installed on Linux. You can't execute Ruby commands with this alone (although it's natural because Ruby is not installed).

In the state of "Install Ruby", it will be in the following state

The following shows the state where "Node.js" is installed.

The dotted line is because it was deleted with the sudo apt purge -y nodejs npm command.

In this state, the ruby, gem, bundler, node, npm, and yarn commands can be executed.

Next, the state "Create the directory of the project you want to create and set up Rails" is shown. 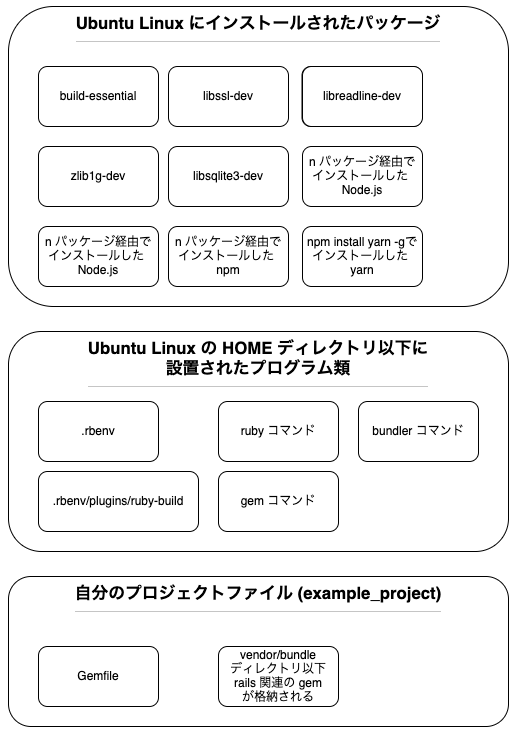 Yes, you now have the ** libraries required for your project ** installed on vendor / bundle.

I think that it is difficult to compare with this alone, so I will show the case where gem install rails is executed. 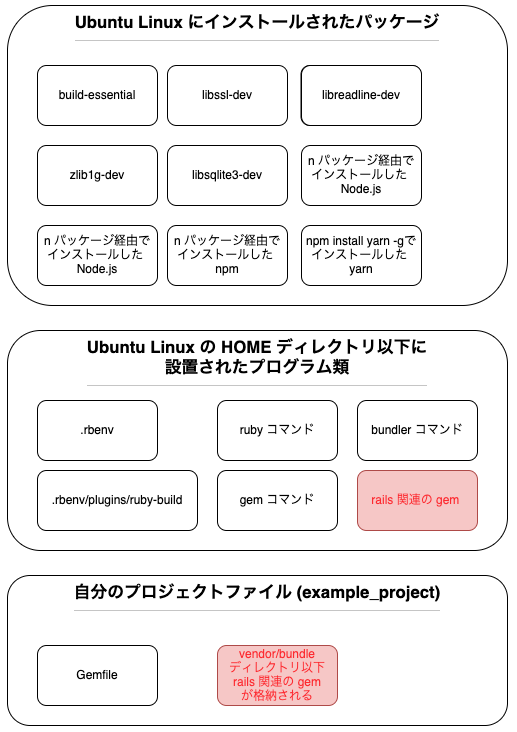 It is shown in red because I want to emphasize it.

What I want to say here is that the gem of rails that executes the ** rails command and the version of" gems related to rails are stored under the vendor / bundle directory "may be different. There is ** </ font>.

On the other hand, the above method (method without gem install rails) does not depend on" programs installed under the HOME directory of Ubuntu Linux ".

Therefore, it is comfortable to make effective use of the bundler command to install the libraries required for the program under a specific directory, and to" keep the Ruby standard gem environment as simple as possible ". I think you can live a life in Ruby.

(But this story probably applies to ecosystems that have a package management system, such as Python.)

Therefore, I think it is important to properly ** understand the meaning of what role each command is in charge of and what it is suitable for, and execute it **.

Please forgive me for the random writing because I am writing with momentum.

Why I have 10 years of experience in Ruby and don't run the [absolutely] gem install rails command
I don't see an error in Rails bundle install ... the solution
[Ruby on Rails] I want to get the URL of the image saved in Active Storage
I changed the Ruby version and now I can't bundle install
Method definition location Summary of how to check When defined in the project and Rails / Gem
[Webpacker] Summary of how to install Bootstrap and jQuery in Rails 6.0
[Ruby on Rails] Change the save destination of gem refile * Note
Erase N + 1 in acts_as_tree of tree structure Gem of Ruby on Rails
Install Rails in the development environment and create a new application
I summarized the flow until implementing simple_calendar in Ruby on Rails.
Things to remember and concepts in the Ruby on Rails tutorial
I want to change the value of Attribute in Selenium of Ruby
[Ruby on Rails] How to log in with only your name and password using the gem devise
What to do if you can't bundle update and bundle install after installing Ruby 3.0.0 in the Rails tutorial
I ran the rails server command on windows10, Ruby2.6.6 and got "cannot load such file --sqlite3 / sqlite3_native"
Implementation of ls command in Ruby
[Rails] Difference in behavior between delegate and has_many-through in the case of one-to-one-to-many
[Ruby] I want to extract only the value of the hash and only the key
[Ruby basics] About the role of true and break in the while statement
I tried to make full use of the CPU core in Ruby
Ruby on Rails When you don't know the cause of rollback when saving.