After all, what is [rails db: migrate] doing?

I use ** rails db: migrate ** as a matter of course in Rails, but I think there are some people who use it somehow and don't know what they are actually doing.

Until recently, I somehow understood that ** ah migration files are reflected in the database ~ **.

However, as I studied deeply, I wondered, "What are each Rails command doing after all?", So I summarized it in this article.

From the conclusion ** migrate is the act of reflecting the contents of the migration file in the DB ** Will be.

However, this alone is weak, so I will dig a little deeper.

First of all, the basic recognition part, the framework called Ruby on Rails uses a model called MVC. 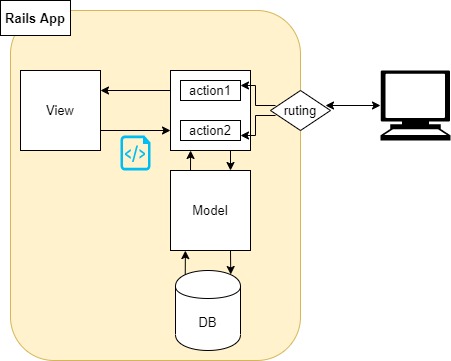 I will omit the details here, but

It consists of three parts.

Before understanding migration, let's start with the model creation command.

When you execute the rails g model command, two types of files, a model file and a migration file, are created (strictly speaking, a test file etc. are also created automatically).

Each of these files

There is such a role. 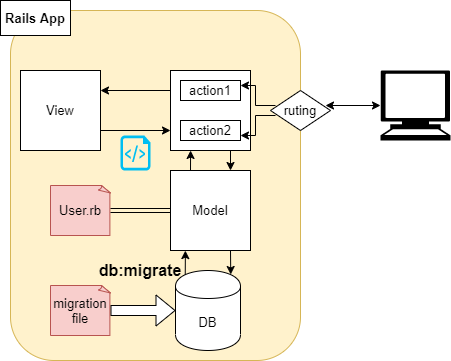 In particular, all the models created here inherit the class called ApplicationRecord.

In addition, the parent class of this ApplicationRecord class inherits from ActiveRecord :: Base.

This ActiveRecord class has the ability to translate the SQL syntax needed to interact with the DB.

Therefore, ** you can easily access the DB and tamper with the data without writing SQL syntax each time **.

You may not be familiar with it when you enter from Rails, but in order to access the DB and manipulate the data, you usually have to skip the instructions using another language called SQL **.

However, Rails can use this ** ActiveRecord ** to automatically translate it into SQL and operate the DB ** with a more intuitive and simple syntax.

Also, since getters and setters are automatically defined in this ActiveRecord :: Base class, you can refer to the instance value ** without intentionally defining ** attr_accessor etc.

I see… It's certainly convenient, but what made it difficult to understand getters and setters ...

>> What are setters and getters in the first place?

Make changes to the DB based on the migration file created by running rails db: migrate. In this case, a new table is created on the DB for migrate when creating the model.

The table created by ActiveRecord has the following characteristics.

By the way, if you create a migration file with ** rails g migration **, the change method is automatically defined and you can make changes to the already created table.

That's all about migration.

I'm not very confident, so I'd appreciate it if you could point out any mistakes in Lee's commentary!