For the purpose of learning, I built a server-client smartphone application. This article is a reference article that summarizes the sites that were referred to when implementing. It's 1 screen, 1GetAPI, but there are many things to do and it was a great learning experience. 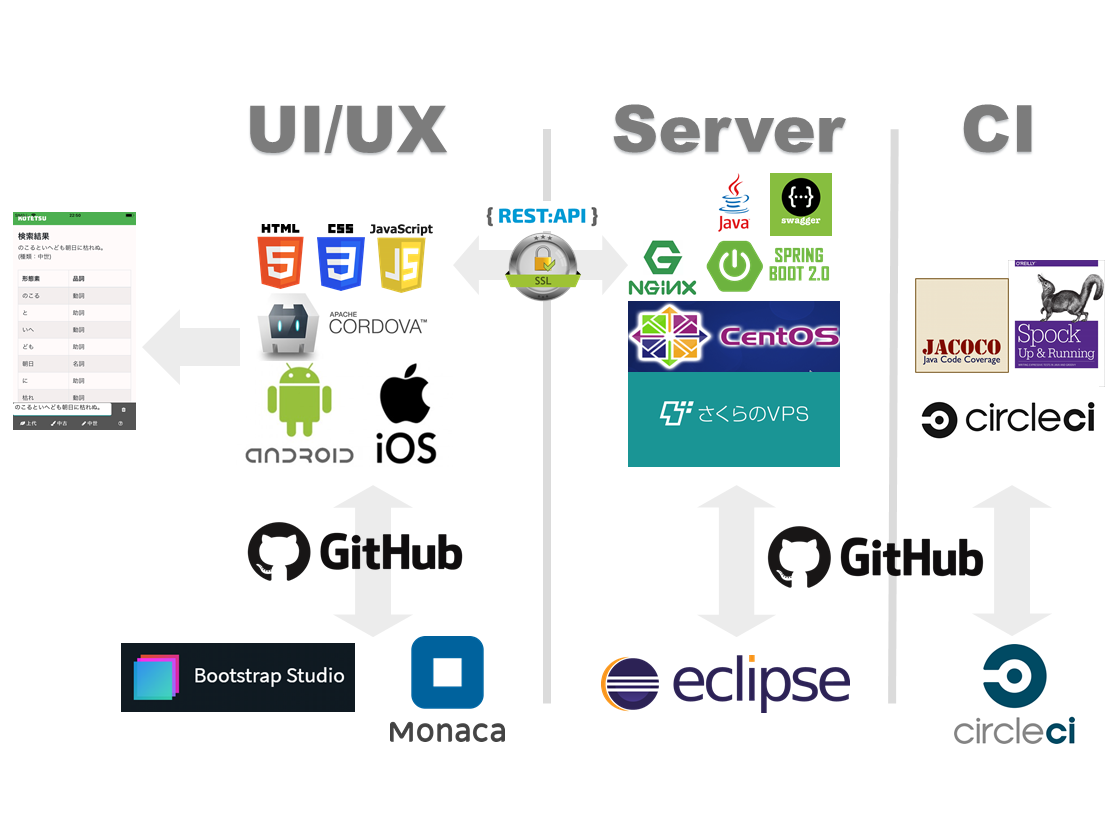 The Server development environment is Eclipse, which I always use. No comment in particular.

Bootstrap Studio is used as a design tool. I don't think it's for professional designers, When designed by a non-designer like me

These two points are very useful.

It's about 3000 yen shareware, but it's also a permanent license with no additional cost.

This time, front-end development adopted CORDOVA. There are two reasons.

Monaca is an integrated development environment for front-end development and can be executed from implementation to build. There is a free frame. God.

circleci is a build tool like Jenkins etc. There is a free tier. Actually it was planned for Docker & Jenkins, but it died to reduce the server cost burden. This time, only the CI tool of Server was implemented.

I started by running Hello World with Spring Boot and then extended it to Rest API.

The naming convention has become appropriate due to the development by one person, but I think it should have been practiced first.

Pack the source and test code while looking at the coverage

JUnit chose Spock because it has readability issues, but it was also very easy to handle.

Coverage was an opportunity to think about the range of activity and test cases to be supplemented.

Ask Swagger. It's OK if you write SpringFOX in Gradle and explanatory text in main class.

AWS was ideal, but I decided to rent a monthly CentOS server that was handled due to learning costs.

What to do 1. Make it possible to work with Teraterm and WinSPC

What to do 2. Install the JDK for Spring Boot to work

What to do 3. Deploy Spring Boot Jar & check operation

SpringBoot includes Tomcat and can be executed by jar alone without setting up a Tomcat server.

[Step 2. Register as a resident service] In the actual service in, the following work is done to make it resident.

If you proceed to this point, implementation will proceed for each server and client. On the other hand, in order to actually combine and communicate, it is necessary to support CORS (Cross-Origin Resource Sharing).

When sending such as POST, it is necessary to be aware of the preflight request.

It seems that Chrome on Android does not allow communication with the API unless it is HTTPS. Since there is no help for it, I set SSL on the Server side to enable HTTPS communication.

What to do 1. Set your own domain

What to do 2. Get an SSL certificate

I used Let's Encrypt, which is provided free of charge by a non-profit organization in the United States. The Let's Encrypt certificate expires in 3 months, so it's a good idea to add cron.

What to do 3. Install nginx and link with SSL certificate

The reason I introduced nginx was because I couldn't understand how to incorporate SSL directly into Spring Boot. ..

Submit to the App Store

You will also be asked to register the device as build information. I bought a used iPhone 6 (B rank) for debugging the actual machine. About 9000 yen. If you're a communicator, get old from your Apple user friends.

To publish the iOS app, you need to pass the review. Even if it is NG, it will politely comment on the chat, so please correct and resubmit according to the instructions.

There is no app review on Google Play, just add the necessary information and submit. 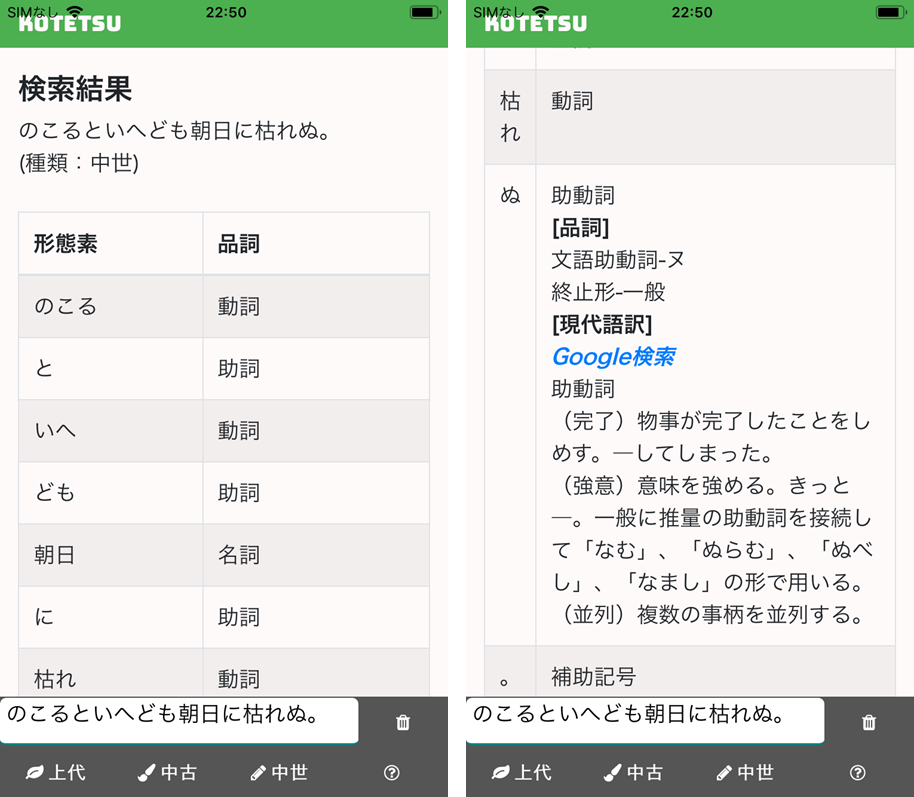 An app that returns Mecab morpheme results and some words with meaning when you enter a classic sentence. I really got the idea that came out when I was watching TV with my wife.

Although it is a single pella in the article, it took a long time to work while stumbling on the first one. I had some money, but (in terms of efficiency) I stopped sticking to no cost and tried to put it out.

That is all for the introduction. Now that I've got it right, I want to make enhancements and new apps again.