Nice to meet you, I'm Nakamura. An engineer () who is trafficked like crazy in Tokyo. It's been almost two years since I entered as a new graduate, and it's about time to escape from Sier. I thought I'd start studying seriously from today, so I created a Qiita account with momentum. Markdown I'm not good at dying, so please forgive me for being hard to read. (It would be better if this area could be improved while mass-producing shit articles)

Why did you get motivated

I think my company is barely black, but for some reason it seems that I can get a settlement bonus, so I had an interview with my boss today. The other day, it seems that I was told that I was talking to a sales person that it was a salary table. "If you want to raise your salary, change jobs!" I was told normally while laughing.

This boss is a really respectable person "Even if I change jobs, it will be profitable for my company, so I'll study properly. Well, even if I'm at my company, my salary won't go up." He said something like that. (This margin is amazing)

Also, I usually get expectations from the company, and when I say something like that, I can only laugh like Ahaha on the spot, but I feel motivated. It seems that it is also written in management books around that area.

For the time being, I used to write batches and other server-sides in Java without knowing the meaning, but I want to become a man who also touches the front desk.

Since I'm a liberal arts graduate in the first place, programming is only a liberal arts class level knowledge. The training was also discontinued in the middle and I was sent to a hell named OJT at the scene, so I have not learned the basics, so I decided to proceed with the book I bought at the Kindle sale a while ago and left it. think. 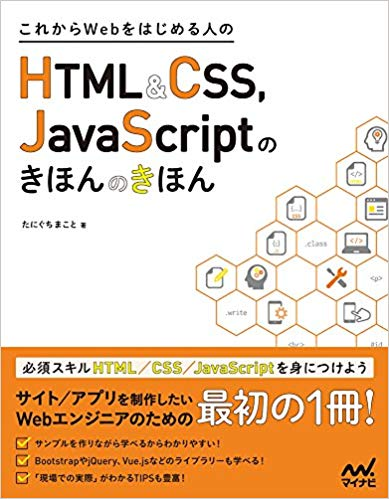 This is this child. I'll do my best. I've advanced about 20% today, so I want to finish the basics quickly.

For the time being, if you understand that HTML and CSS are like this, it would be nice to study like the basics of JavaScript. I feel like. For that purpose, I haven't touched the infrastructure, so I need to study that area.

Even if I don't mind, I'm thinking of becoming a cool engineer by the age of 30. Maybe if I don't feel like it, I won't update Qiita either. If you can study in a good way, I think it will output in a good way.

A story that I realized that I had to study as an engineer in the first place
I will expose the fucking app that I made hard to get a job as an engineer from inexperienced.
The story of introducing Gradle as a retrofit to an existing system that did not manage packages
The story that docker had a hard time
I realized that Runnable wasn't just an interface for running in a separate thread
A story that I had a hard time trying to build PHP 7.4 on GCE's CentOS 8
Pursuing the mystery that the number of DB connections in Tomcat increases to only 8-A day of an OSS support engineer
A story I was addicted to in Rails validation settings
[Docker] The story that an error occurred in docker-compose up
A story that I struggled to challenge a competition professional with Java
I tried to summarize the words that I often see in docker-compose.yml
I tried to illuminate the Christmas tree in a life game
The story of Collectors.groupingBy that I want to keep for posterity
[Ruby] I want to put an array in a variable. I want to convert to an array
The story that Tomcat suffered from a timeout error in Eclipse
A story that I finally understood Java for statement as a non-engineer
The story I wanted to unzip
Creating an ArrayList that allows you to throw in and retrieve the coordinates of a two-dimensional plane
A story that I wanted to write a process equivalent to a while statement with the Stream API of Java8
The story of forgetting to close a file in Java and failing
A story I was addicted to when testing the API using MockMVC
A program that determines whether the entered integer is close to an integer
How to get the current date as a string in yyyyMMdd format
I thought about the best way to create a ValueObject in Ruby
I want to display an error message when registering in the database
A story that was embarrassing to give anison file to the production environment
I want to ForEach an array with a Lambda expression in Java
[Ruby] I tried to summarize the methods that frequently appear in paiza
[Ruby] I tried to summarize the methods that frequently appear in paiza ②
I had to lower the PHP version in Docker + Composer + Laravel environment
A story about an arithmetic overflow that you shouldn't encounter in Ruby
I tried to summarize again the devise that was difficult at first sight
[Small story] I tried to make the java ArrayList a little more convenient
A story about a super beginner participating in the AtCoder contest for the first time (AtCoder Beginner Contest 140)
[Swift] I already have a lot of information, but I tried to summarize the cast (as, as !, as?) In my own way.
When I think about the 402 error that suddenly appeared in the middle of the introduction of PAY.jp, there was an unexpected place
I tried to make an app that allows you to post and chat by genre ~ Where I had a hard time ~
An embarrassing story that was treated as the same day when trying to compare dates on 3/31 and 4/1 [Java / Calendar]
I want you to put the story that the error was solved when you stabbed the charger in the corner of your head
I want to find the MD5 checksum of a file in Java and get the result as a string in hexadecimal notation.
A story about the JDK in the Java 11 era
I want to send an email in Java.
A story that took time to establish a connection
I tried to develop a DUO3.0 study website.
I wanted to make (a == 1 && a == 2 && a == 3) true in Java
A story about making a Builder that inherits the Builder
I tried to develop an application in 2 languages
I want to get the value in Ruby
[Ruby] I want to make a program that displays today's day of the week!
Pass the condition to be used in the Java8 lambda expression filter () as a parameter
A story that got stuck with an error during migration in docker PHP laravel
The story that did not disappear when I tried to delete mysql on ubuntu
I want to place RadioButtons in the same RadioGroup at any position on the screen.
I want to use PowerMock in a class that combines parameterized tests and ordinary tests
[Rails] I want to display the link destination of link_to in a separate tab
A story that did not work when trying to handle events in Notification Center
A story I was addicted to when getting a key that was automatically tried on MyBatis
I tried to create an Amazon echo skill that teaches scraped information in Java using the Alexa Skills Kit (ASK)
Various things that an inexperienced second year engineer from liberal arts felt that he should have done it in the first year