I made a site that summarizes information on carbohydrate restriction with Vue.js

I made such a site. https://lowcarb-recommend.com/ 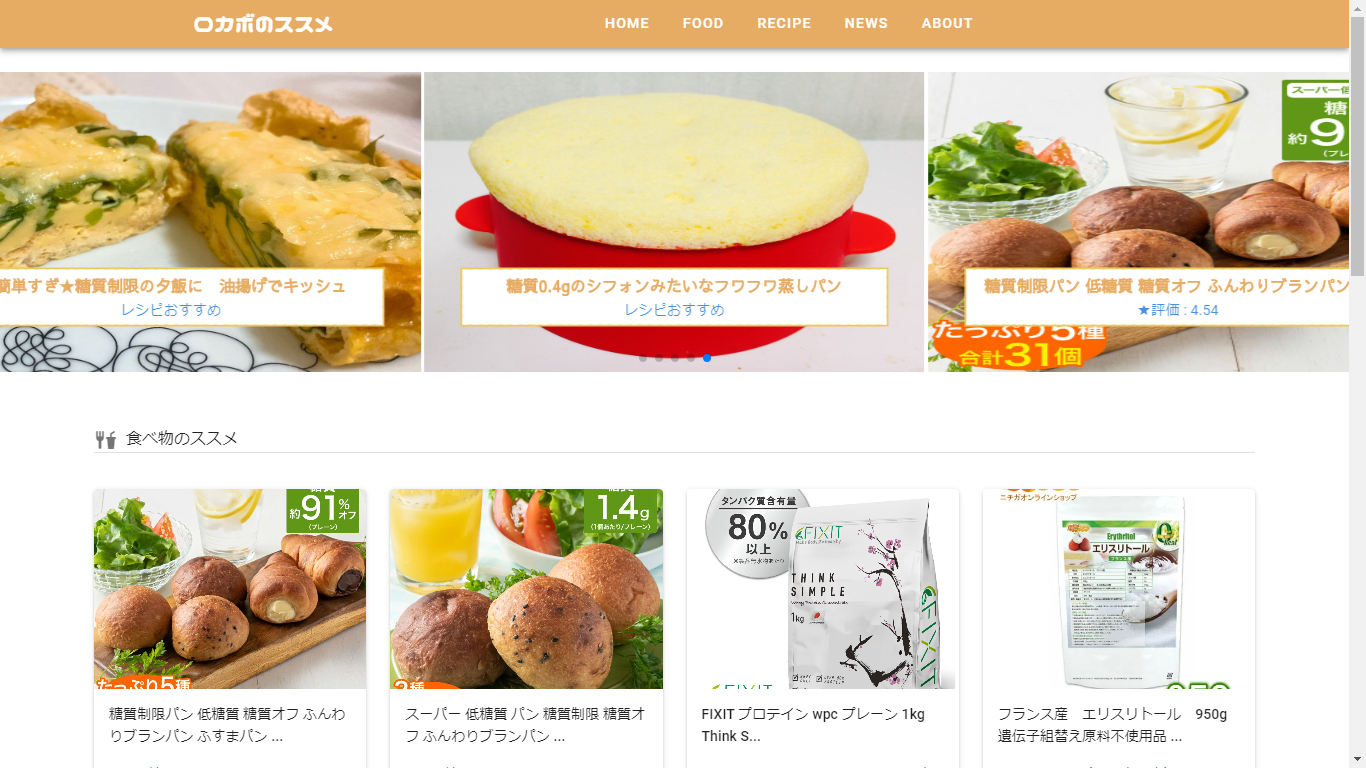 I started studying Vue.js around the middle of March, and when I was thinking that I wanted to make something by the end of Golden Week, I just started a sugar-restricted diet with a self-restraint. I was there, so I decided to create a site that summarizes information about it, so I started creating it.

What kind of function does it have?

The functions are the following three points.

Regarding the sugar-restricted diet in 1., we obtained information from Rakuten Ichiba API and made it possible to search by shop or by genre (bread, noodles, etc.).

Regarding the sugar restriction recipe in 2., information is also obtained from the Rakuten recipe API.

Regarding the news of 3., we have obtained RSS from Google News.

Originally I wanted to use Vue.js, so I decided on the front end and wondered what to do with the back end, but if everything is unfamiliar, it will take time to make → I can not make it to the end I was a little scared, so I chose Java, which I use for business.

The backend was Java, which I use at work, so I was able to finish it in less than two weeks. As for the front end, it was Vue.js that I had just started learning, so I spent a month and a half researching and completing it.

Where I had a hard time

Below is a summary of the difficult points and what I referred to.

How to collect news information

Initially, I wanted to use the News API, which would be commonly used in news-related services. However, 90% 9 minutes I think that my usage was bad, but I could not get information on carbohydrate restriction well, and when I was thinking about alternatives, I found a way to get RSS from Google News, so that I switched.

Please refer to the following for how to get Google News RSS. https://qiita.com/KMD/items/872d8f4eed5d6ebf5df1 http://mogakana.blogspot.com/2011/05/javarss.html

I thought, "Introduce something that works on the TOP page", and after researching various things, I came across this library. I made a lot of thoughts and mistakes, such as not being able to put captions on the photos on the top page and being not responsive.

When the development was nearing the end, I thought it would be cool to convert it to PWA and say "Add to home screen", but I tried various things, but it was not OK with Lighthouse. When I looked at the console, I got the following error.

I also got an error like "bad-precaching-response". I try to update the cache of the _redirects file that I put when deploying Netlify → It seems that the cause was that I was angry that there was no such file, so I excluded it from the cache target referring to the following site.

I solved it by writing the following in vue.config.js.

During development, the outline was completed in about a month (I intended), so I thought it would be over soon, but it took two months in the end. There are a lot of things I want to fix in detail, I thought that there was the following chengyu while developing, so keep this in mind when developing in the future, "I think 90% is over. But maybe it's still 50% ~ ", it might make you feel better,

I wrote a lot, but please try it! Recommendations for low carbs

I made a site that summarizes information on carbohydrate restriction with Vue.js
I made a portfolio with Ruby On Rails
I made a mod that instantly calls a vehicle with Minecraft
I made a GUI with Swing
I made a risky die with Ruby
I made a rock-paper-scissors app with kotlin
I made a calculator app on Android
I made a rock-paper-scissors app with android
I made an app to scribble with PencilKit on a PDF file
I made a mosaic art with Pokemon images
I made a gender selection column with enum
I made a viewer app that displays a PDF
I made a LINE bot with Rails + heroku
I tried deploying a page made with antique Middleman on Azure Static Web Apps
[Ruby] I made a crawler with anemone and nokogiri.
I made a drawing chat "8bit paint chat" on WebAssembly
I made a library that works like a Safari tab !!
I made a library for displaying tutorials on Android.
I made a Wrapper that calls KNP from Java
I made an Android application that GETs with HTTP
I made a program in Java that solves the traveling salesman problem with a genetic algorithm
I made a development environment with rails6 + docker + postgreSQL + Materialize.
I made a plugin to execute jextract with Gradle task
[Personal development] I made a site to recruit test users!
I made a chat app.
I made a command line interface with WinMerge Plugin using JD-Core
A story that I struggled to challenge a competition professional with Java
[Rails] I made a simple calendar mini app with customized specifications.
I want to add a browsing function with ruby on rails
I want to use swipeback on a screen that uses XLPagerTabStrip
I made a mistake when installing VLC on Ubuntu 18.04 via snap
I made a simple search form with Spring Boot + GitHub Search API.
I made a source that automatically generates JPA Entity class files
I made a question that can be used for a technical interview
I tried deploying a Docker container on Lambda with Serverless Framework
Run a simple model made with Keras on iOS using CoreML