Introduced because I have no choice but to use OpenCV in university graduation The guide Even if I search now, most of the stories are in Python and C++, and there are few java stories, so I had a hard time.

I basically followed the following sites. This is basically more polite. However, with the latest version (4.4.0) of the present, the test code can not be executed well, so write it there. Using OpenCV with Java | JProgramer

It is good to execute the downloaded .exe file and extract it to the C drive. I created a folder called OpenCV and expanded it there.

In the reference site, it is a user variable, but I added it to the system variable. Select “Path” and click [Edit]. At the bottom C:\OpenCV\opencv\build\java\x86 Add this, if you use OpenCV in java, you only need to add this. If you use it in Python or Visual Studio, this is not enough. I have VS2017 in it so I will pass it for it. 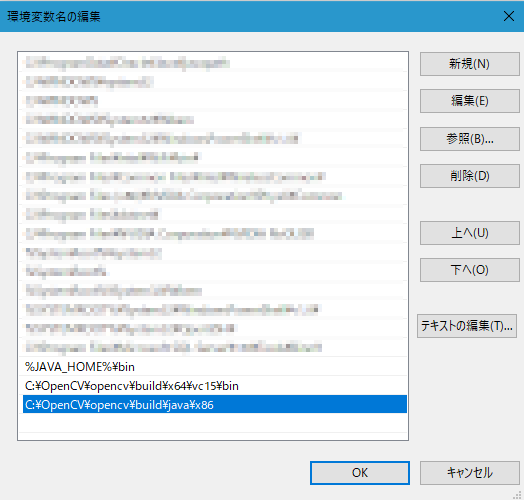 The test code of the reference site gives an error in Ver.4.4.0. Specifically, the class that outputs the image is moved to imgcodecs instead of highgui.

The compile command is below ↓

When executed with, a bright red JPG image was output (saved) in the same folder.

If you set the classpath

You can do it with. See the reference site for details.