How to build a Ruby on Rails development environment with Docker (Rails 5.x)

In this article, I will introduce how to build a development environment for Ruby on Rails (hereinafter, rails) 5.x series using Docker.

What are the benefits of building an environment with Docker?

Most rails beginners usually install it directly on their machine to build a development environment. However, if you stumble due to a subtle environment (Ruby version, environment variables, etc.) I think it will take a lot of time to troubleshoot.

So, by building a rails environment on the virtual environment with Docker Equal behavior can be achieved in any development environment on any machine, avoiding errors due to environmental differences. It is also an advantage that you can reset once at worst when you mess with the environment too much.

You have Docker installed on your machine

Also, create an arbitrary working folder. Here, we will create a folder called "rails-docker" and work in it.

Prepare the following four empty files in rails-docker. If you are using VScode, you can create it by creating a new file, You can also use the touch command from your Mac terminal.

Docker builds the container based on a file called Dockerfile, A Docker Image (container template) will be created.

First, write the full text of the Dockerfile. The version of Ruby used is 2.7.0.

Although it is a bullet point, I will explain the meaning of each.

In Ruby, you can define the gem you want to use in your environment with a file called Gemfile.

A gem is a Ruby library. gem is managed by a package management system for Ruby called RubyGems, and can be installed through the gem command provided by RubyGems.

I will explain a little again.

If you run the "bundle install" command in the directory where the Gemfile is, You can install the defined gem according to the definition in the Gemfile.

For the Docker file I mentioned earlier, copy the Gemfile to the working directory of the container. You specified to run bundle install in that folder, didn't you?

In fact, Gemfile.lock doesn't need to write anything at first. This is not a file that you edit directly After running bundle install based on Gemfile The installed gems will now be listed in Gemfile.lock.

To use it, refer to Gemfile.lock to find out the installed gem and version. You can also run bundle install from Gemfile.lock Gemfile.lock is used when you want to recreate the exact same environment or when developing with a large number of people.

Isn't it just a Gemfile? As a supplement to those who thought that it was sharp, one of the reasons is that Gemfile can actually be written in this way.

In this case, the version of rails installed by bundle install is 5.2.1 or higher The version that can actually be installed (published) depends on the time.

However, in Gemfile.lock, when you try to install according to Gemfile, the gem itself and the specific version actually installed It even records the packages that were installed for accompanying needs.

To summarize a little, Gemfile is a "list of gems needed by your app", On the other hand, Gemfile.lock will contain "information on the gem actually installed as a result of following the Gemfile".

This yml file is used by Docker Compose.

Docker Compose is about applications that consist of multiple containers It is a tool for managing such as building Docker image and starting / stopping each container.

In Docker Compose, definitions for multiple containers, including options for Docker build and container startup, are written in a file called docker-compose.yml. You can use it to build Docker images and start containers.

If you want to run Rails by itself like a development environment, you can just use Dockerfile. In addition to the application server for running Rails A web server for accepting access from the Internet when actually publishing, We may also prepare a database server for storing and processing data.

Since rails also requires a database, we will build a container for a database server using MySQL as well as a web server. Although it is not explained in detail here, the database server (container) with which rails is linked is specified by name in "depends_on" in the column called web.

I will explain how to read the command, including options ↓

It has the meaning.

If you execute this one-line command, it will take a few minutes to process, so wait patiently while eating chocolate.

Installation of gem added to Gemfile, And run build to bring the created files into the container.

After the build is complete, edit the settings in the database file used by rails. The target file is ** database.yml ** in the config directory.

To start the container, run the following command:

docker-compose up is a command to start a container based on docker-compose.yml It can be started in the background with the option "-d".

Now that the container has just started and the database has not been created Run the following command to create the database.

It is a process to execute rails db: create (= create a new database) in the web container running rails.

You have successfully started the rails development server. Enter ** localhost: 3000 ** in the address bar of your browser and check the startup. 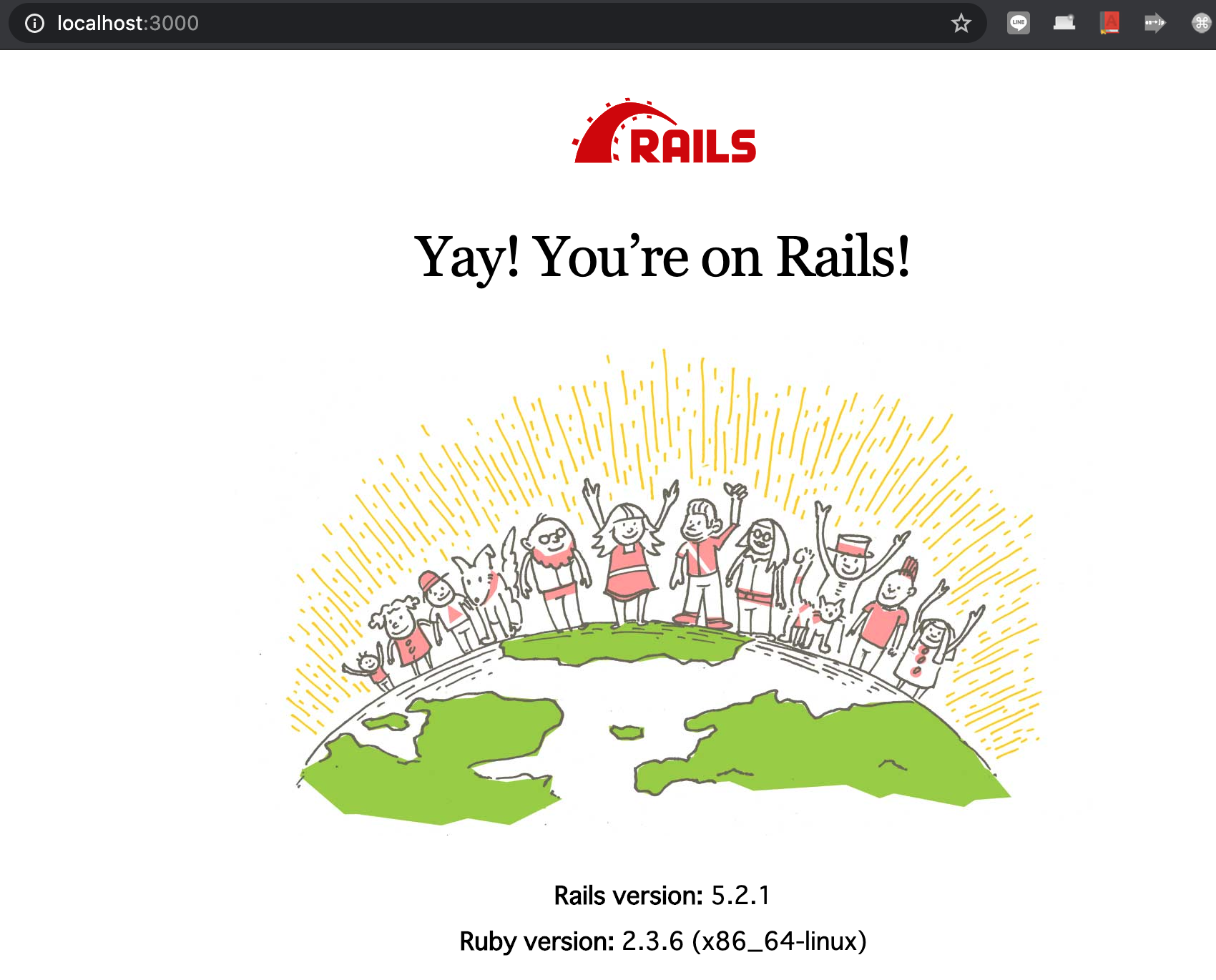 In rails, if you see the familiar screen, you're done.

To stop the development server, execute the following command to stop the containers at once.

If you want to start it again, run docker-comopose up -d.

The set of files created by this is listed on Github. If you don't understand the folder structure, or if you want to compare and see if it works in your environment, please refer to it.